On April 5, 2002, a 55 year-old male (decedent, and owner of the company) died from injuries received when a backhoe he was operating over turned on its side. He and the job foreman were laying pipe for a water line. They were using a backhoe to carry the pipe from a trailer to a pipeline ditch. A portion of the ditch was not directly accessible with a backhoe. To access the ditch, the backhoe needed to be driven through a garden, and turned toward the ditch at a 90-degree angle. The decedent had placed the pipe in the ditch, then turned the machine around and tried to exit the area. He had the bucket and outriggers up in the air instead of close to the ground. Upon exiting the area, the right tire ran up on to a tree stump causing the backhoe to tip over on its left side. The operator fell out of the backhoe and was pinned underneath the left rear cab standard. Death was due to crushing injuries.

On May 30, 2002, the FACE program was notified of a backhoe operator who died after being crushed by when the backhoe overturned. A site visit was made on June 4, 2002. Two employees, the job foreman and the office manager were interviewed.

The decedent’s father started the company in 1963. The contractor originally layed natural gas lines and employed between 40 – 50 employees. Approximately 5 years ago, the company lost a large work contract and now employs 5 – 10 people. The company had been contracted by a local municipality to lay 7550 feet of 10-inch water line. At the time of the incident, the company had six regular employees and used temporary help when necessary. Toolbox safety talks were conducted each Monday by the foreman.

Cause of death was due to crushing injuries.

On April 5, 2002, a 55 year-old male (decedent) died from injuries received when the backhoe he was operating flipped over and crushed him beneath its left rear cab standard. The backhoe was a 1991 Case 580K and was equipped with a seatbelt and rollover protective structure (ROPS). At the time of the incident, the decedent was not wearing the seatbelt provided. He died at approximately 9:30 AM on the day of the incident.

A path 16 feet and 7 inches wide had previously been cleared by another company for utility poles, electrical lines and other services to be installed. Tree stumps and brush had been pushed to the sides. A water line was to be laid on the north side of this path. The path runs east and west.

At approximately 9:15 am on the morning of the incident, the company was preparing to string 10-inch pipe as part of the water line installation project. The job was approximately three-fourths complete. The decedent and the job foreman were waiting for a laborer and another equipment operator to return from another location on the job site (approximately ½ mile away) to help string the pipe. At that time, the team was to hook a trailer containing the pipe to the backhoe and begin stringing pipe.

While they waited for the laborer and other equipment operator, the decedent decided to get diesel fuel, but then changed his mind. Instead, he told the foreman he wanted the two of them to begin stringing pipe in the ditch closest to the trailer. This entailed driving the backhoe back and forth from the ditch to the trailer.

The decedent climbed in the backhoe, equipped the front bucket with calipers to pick up piping, then attached a short piece of cable to the calipers. He then picked up a piece of pipe from the trailer that was located off to the side of the street in a grassy spot. He and the foreman laid three sections of pipe without any problem. The section of the ditch where the fourth section of pipe was to be laid was inaccessible by the adjacent path. Access had to be through a garden that ran perpendicular to the water line. It had not been plowed and was on a level grade. After obtaining the garden owner’s permission to drive across it, the decedent climbed back on the backhoe, picked up a section of pipe from the trailer and drove up the neighboring drive. He crossed the garden, drove down a 30 foot incline (slope of 8 degrees) and laid the pipe in the ditch. The foreman who had walked to the drop area, unhooked clamps, and walked back to the trailer (approximately 40 yards away) to wait for the backhoe to come and hook up another joint. As he walked toward the trailer, he heard the backhoe trying to back out away from the ditch. He heard the bucket hit something, looked over and saw the backhoe was turned around and was ready to exit the area. He continued to walk toward the trailer, bent over to pick up a clipboard from the ground, when he heard an altered sound from the backhoe. He looked up and didn’t see the backhoe. He ran over to investigate to find the backhoe on its side with the decedent pinned underneath the left rear standard. The foreman tried to find the decedent’s pulse, but couldn’t. He called 911 emergency medical services from his cell phone. Emergency services and the coroner arrived at the scene. A trackhoe moved the backhoe so the decedent could be removed from under the backhoe. The coroner pronounced the decedent dead at the scene. The Certificate of Death listed the cause of death as due to crushing injuries.

Recommendation No. 1: Heavy equipment operators should use safety equipment provided by the manufacturer such as a seatbelt. The seatbelt was already part of the equipment.

Discussion No. 1: Roll over protective structures create a safety zone for the operator in the event of a roll over. Seat belts are an important component of ROPS because they keep the operator in place and from being thrown off the equipment. Operators should be required to use seat belts when operating heavy equipment. Had the operator been using the seatbelt provided, it is possible he could have survived this incident.

Recommendation No. 2: Before starting, work sites should be inventoried for hazards and ways to avoid hazards should be communicated to employees.

Discussion No. 2: The land had been cleared to install utilities. Tree stumps, limbs, bushes and brush had been bulldozed to the sides of the work area. The tree stump was visible and should have been avoided by the operator. Time should be taken for a thorough hazard assessment of the work site before work begins. An assessment of the area probably would have revealed the tree stump sticking up and the operator, had he known about the stump, would have been able to avoid it.

Recommendation No. 3: Machinery should be operated in a safe manner. 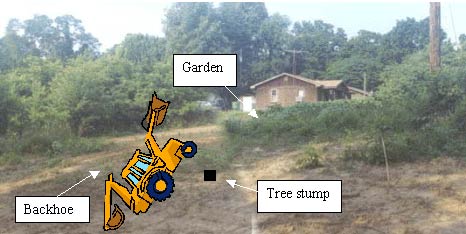 View from pipeline ditch toward the garden egress. The area where the tree stump was had been graded by the time the FACE investigation took place.