A 30-year-old male shift supervisor (the victim) died after both arms were caught and partially amputated between two paper machine rollers. The victim was inspecting the condition of a woolen-felt screen where it traveled over a roller of a paper-making machine at a paper-manufacturing plant, when the incident occurred. A break had occurred at the area where the continuous sheet of paper, located on the felt, traveled over a roller. Two rollers are located in this area; the bottom stationary roller which has a woolen felt covering, and a top moveable roller which applies pressure to the paper sheet against the woolen felt. The victim, without first raising the top roller away from the bottom roller, entered the unguarded roller access area and began feeling the woolen-felt screen for any possible damage that may have caused the break. Although the incident was unwitnessed, it appears that the victim’s hands became caught between the top and bottom rollers and his arms were pulled up into the rollers at the nip point (the area between any two in-running rolls). A co-worker, walking by the area, looked over and saw the victim caught in the rollers and activated the lever on the control panel, which raised the top roller, allowing the victim to fall to the floor. The co-worker ran to aid the victim and discovered the victim’s right arm had been partially amputated at the shoulder area. The co-worker called the plant’s nurse who arrived within 2 minutes and checked for vital signs. The nurse found the victim unconscious, bleeding profusely, and without a pulse. An ambulance was called while the nurse and other co-workers tried to control bleeding and performed cardiopulmonary resuscitation (CPR). The emergency medical ser- vices personnel arrived in about 4 minutes, continued CPR, provided additional first aid and transported the victim to the local hospital, where he died. NIOSH investigators concluded that, in order to prevent similar incidents, employers should:

On July 5, 1995, a 30-year-old male shift supervisor (the victim) died after his arms were caught between two rollers on the paper machine he was inspecting. On July 7, 1995, officials of the Occupational Safety and Health Administration of the State of Tennessee (TOSHA) notified the Division of Safety Research (DSR) of this fatality, and requested technical assistance. On July 20, 1995, a DSR safety specialist conducted an on-site investigation. The incident was reviewed with the TOSHA compliance officer and employer representatives. Photographs of the incident site and pertinent records were obtained during the investigation.

The employer was a paper manufacturer that produced high quality coated and noncoated paper. The facility’s safety department was comprised of a safety officer, two assistants, and one nurse. The facility had been in operation for 74 years. The current owner had been operating the facility for 2 months and employed 650 workers. The employer had a general written safety policy and written safe work procedures; however, they did not address the specific work task that was being performed by the victim at the time of the incident. Employee training was conducted on-the-job, primarily by other employees. Additional employee training was provided either verbally, or with the use of videos. Safety meetings were conducted by the shift supervisors, who were held accountable for employee safety. The victim had performed the duties of shift supervisor for 2 months with the current employer. He had worked at the facility for 7 years, the last 4 years as a shift supervisor. This was the first fatality experienced by the company.

Papermaking is a production process that begins with tree harvesting and concludes with a cut sheet of paper. Harvested timber is ground to pulp, which is then cooked in a chemical solution. The cooked pulp is washed to remove the chemicals and screened to separate out undigested wood knots and other unwanted materials. The pulp is bleached, pounded and squeezed, and dyes are added at this point. The pulp, along with water, flows at a controlled rate through a headbox and onto a moving wire-mesh screen. Water is drained away from the pulp, leaving a sheet of matted pulp which still contains a high proportion of water. The sheet then moves onto a woolen felt screen, which runs through a series of rollers, where more water is removed. Finally, the sheet passes over a number of heated drums, which evaporate the remaining water.

The facility operated on three 8-hour production shifts per day, 365 days per year. The manufacturer used 3 paper-making machines to produce about 650 tons of finished paper daily. Each machine operation required nine workers (crew) who performed separate tasks in the paper making process. The crew, which included a shift supervisor (the victim), a utility person, a 6th hand, 5th hand, 4th hand, 3rd hand, back tender, machine tender, and stock preparation person, began work on the 7 to 3 p.m. shift on the day of the incident. Paper production continued until about 7:33 a.m. when a paper break occurred at the area where the continuous sheet located on the woolen felt screen traveled over the bottom roller. The area consisted of two rollers: a top roller which could move up and down pneumatically and was about 14-inches-diameter and 25-feet-long; and a stationary 18-inch-diameter roller which was also 25-feet-long and covered with woolen felt. The top moveable roller can be lowered to apply pressure to the paper sheet against the woolen felt screen, or raised for inspection/maintenance. The clearance between the two rollers when the top roller was in the down position is about 1 inch. A walkway about 2-feet wide, 25-feet long, and raised above floor level 9-inches was constructed of steel plating and provided access to the front of the rollers.

The victim, without first raising the top roller, entered the unguarded access roller area and began feeling the felt for possible damage that may have caused the break. Although the event was unwitnessed, it appears that the victim was standing directly in front of the operating rollers nip point, which was located about 6 feet above the access walkway, feeling the woolen felt screen, when his hand or hands became caught between the top and bottom rollers. His arms were consequently pulled up into the rollers at the nip point (the area between any two in-running rolls) [Figure]. A co-worker, walking by the area, looked over and saw the victim caught in the rollers and immediately activated the lever on the control panel (approximately 10 feet from the ends of the rollers) which raised the top roller, allowing the victim to fall to the floor. The co-worker ran to aid the victim and discovered the victim’s right arm had been partially amputated at the shoulder area. The victim was momentarily conscious and said “I’m hurt bad.” The co-worker ran to the nearest phone and called the plant’s nurse who arrived within 2 minutes and checked for vital signs. The nurse found the victim unconscious, bleeding profusely, and without a pulse. An ambulance was called while the

nurse and other co-workers tried to control bleeding and performed cardiopulmonary resuscitation (CPR). The emergency medical ser- vices personnel arrived in about 4 minutes, continued CPR, provided additional first aid and transported the victim to the local hospital, where he died.

The attending physician listed the cause of death as exsanguination (extensive blood loss).

Recommendation #1: Employers should ensure that access to hazardous areas is sufficiently guarded.

Discussion: Access to the rollers was provided by a stainless steel walkway raised about 9 inches from floor level; the walkway was about 2-feet wide and adjacent to the 25-foot section of rollers. The walkway had no physical barriers at the entrances and exposed anyone on the walkway to the moving woolen felt screen and rollers. Employers should ensure that access to hazardous areas are sufficiently guarded against personnel entry by physical barriers or locked gates. Note: the employer has installed chain guarding at both entrances since the incident.

Recommendation #2: Employers should consider the development and installation of permanent interlocking gates which protect workers from hazardous areas.

Discussion: Because of the ever-present danger of entanglement when working near moving-machinery components, employers should consider installing machine guarding in the areas where work is actually performed upon the material being processed. The paper-making machine was put into operation around 1964 and is still operating as originally set up. Advances in engineering technology may be such that machine guarding may be applicable to this particular machine. Employers should contact machine manufacturers and retrofit, if applicable, guards that prevent any part of the body from contacting the machine’s moving parts. Note: the employer has contacted the machine manufacturer representative, who conducted an evaluation of the machine. Currently, plans are being devised to install an interlocking gate at the entrances of the walkway, which would activate a switch, raising the top roller and thereby eliminating the nip point. Also, the representative is considering other guarding mechanisms that may be applicable.

Discussion: Although the employer had a general written safety program, there was no procedure regarding the inspection of the woolen felt screen. Safety programs should be periodically reviewed and revised, as necessary, to identify and reduce and/or eliminate worker exposures to hazardous situations. The safety program should include, but not be limited to, specific procedures to be followed when entry into the roller area is required. This procedure, at a minimum, should address raising the top roller and locking out the raising mechanism before any entry could be made into the roller area.

Discussion: At the time of the incident, a warning sign was affixed to the frame of the paper machine in the area at the end of the rollers, but the sign was illegible. Employers should routinely inspect areas where warning/danger signs are located and ensure signs are legible, and bilingual in nature, if applicable.

[Note: the employer has affixed new danger signs reading “Danger-Overhead Nip” at the ends of the rollers near the entrances of the walkway.]

Discussion: Scheduled and unscheduled safety inspections should be conducted by a competent person to ensure that work sites are free from hazardous conditions. Regardless of how comprehensive, a safety program cannot be effective unless implemented in the workplace. The inspections may not guarantee the elimination of occupational hazards, but they do demonstrate the employer’s commitment to the enforcement of the safety program and to the prevention of occupational injury.

Recommendation #6: Employers should conduct evaluations at other plants for similar type hazards.

Discussion: The employer has plants in several states and employs approximately 12,000 workers. Paper-making machines similar to the one involved in this incident are in use at these plants. Evaluations should be conducted at these plants to ascertain whether similar conditions exist, and if so, to eliminate them. Note: the employer is currently conducting evaluations at the other plants for similar hazards. 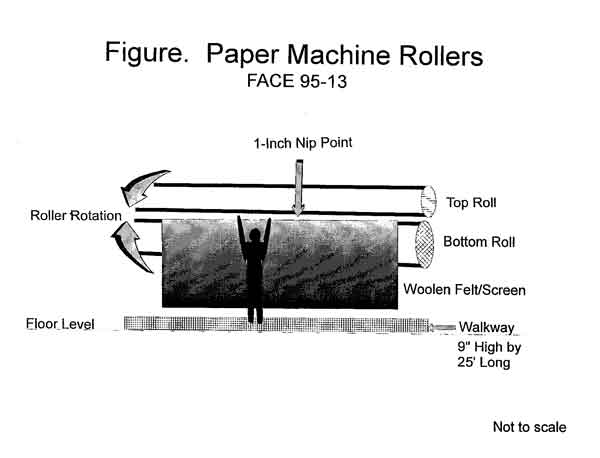