The National Institute for Occupational Safety and Health NIOSH), Division of Safety Research, is currently conducting the Fatal Accident Circumstances and Epidemiology (FACE) Study. By scientifically collecting data from a sample of similar fatal incidents, this study will identify and rank factors which increase the risk of fatal injury for selected employees.

On July 1, 1983, a window washer suffered fatal injuries when the suspended scaffolding from which he was working collapsed. The victim’s nylon safety line also broke allowing him to fall 34 stories to his death.

The County Coroner requested N10SH technical assistance to determine information on factors involved with the accident. Two Division of Safety Research personnel, a safety specialist and a safety engineer, visited the employer to interview witnesses and obtain comparison data from suitable co-workers.

A debriefing session was held with the vice president of the small firm. During this meeting, information was obtained on the company’s overall safety and health program. The vice president was responsible for safety at the incident site and was the supervisor in charge of the window washing activities. Since the employer did not own the scaffold involved in the accident, NIOSH personnel were not afforded the opportunity to visually inspect it. Our interview with a control subject was conducted the following day.

The employer engaged in a maintenance contract to clean windows and began work October 1, 1982. The employer had four employees on the worksite and utilized the scaffolding system permanently installed on the building. During the course of the work, the employer had numerous problems with the scaffold. Such things as the overspeed sensor falling off, wire rope not reeving evenly on drum causing rope to kink and scaffold to jump, swing length connector pins binding and not operating properly, scaffold rollers out of alignment, hoist motor rubbing against scaffold framing, and overspeed brake tilt switch breaking are examples of the problems. The employer notified the scaffold owner and manufacturer of these problems. The manufacturer performed all maintenance repairs to the scaffold; however, the wire cable was not replaced. The kinks were straightened as well as possible.

A week prior to the incident, the employer experienced another problem with the scaffold. The scaffold would continue to travel downward when the hoist motor switch was released to stop the scaffold movement. The manufacturer performed maintenance on the scaffold, adjusting the overspeed brake and testing it several times. The brake did not bold properly; thus, requiring more adjustment until the brake would hold. The servicemen also noticed that the motor contact breakers were out of adjustment and reset them. The scaffold purportedly worked fine until the incident.

On the day of the incident, the work began at 6:00 a.m.; the two-man crew mounted the scaffold and began washing windows. Twenty minutes prior to the incident, the supervisor was in contact with the workers and everything appeared to be normal. At approximately 7:30 a.m. the scaffold collapsed. One supporting cable broke and the remaining part of the scaffold fell from the 34th floor and came to rest at the 5th floor. The failure left one workman dangling on an independent safety line. The other employee’s lanyard broke during the sequence of events allowing him to fall 34 stories to his death.

From the dearth of facts known about this incident, no firm conclusion can be made as to why the scaffold collapsed. Several singular factors or combinations of factors could result in the, same event. An important fact is that the victim’s lanyard broke allowing him to fall to his death. This could result from the lanyard being the incorrect size and strength, deteriorated, or entangled in the falling scaffold thereby exceeding the lanyard load capacity. Of these three possibilities, the latter most likely occurred. It is recommended that: (a) employers frequently remind employees of the hazard of entanglement of life lines and lanyards, and (b) manufacturers analyze present designs of hoisting apparatus to determine how entanglement can be eliminated. 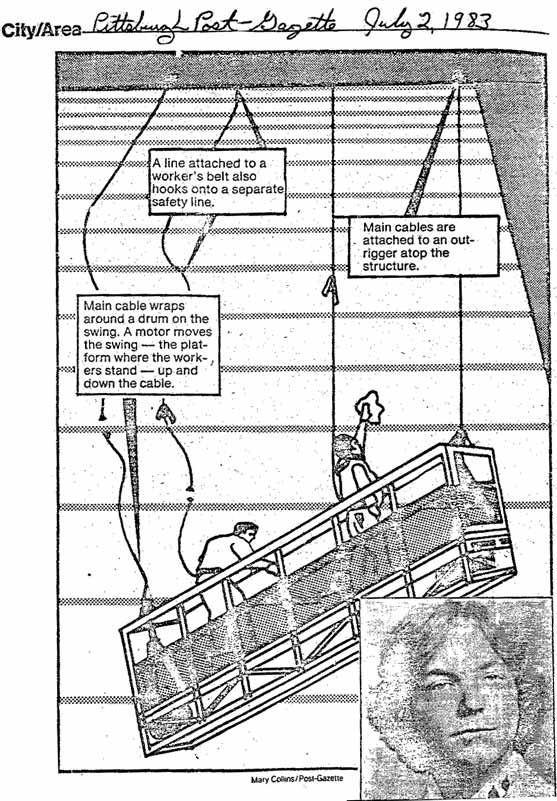