Now more than ever, we see how a changing world can impact the workplace. Many of us have adapted how and where we work because of the COVID-19 pandemic. Nonstandard work schedules and increased demands have heightened work stress, mental health concerns, and fatigue. An aging workforce makes the issue of healthier workers more pressing, while emerging technologies have transformed the work environment. What does all of this mean for how we approach preventing workplace injuries?

Conference topics include occupational safety during the COVID-19 pandemic, mental health, fatigue, sleep, and work hours. Industry-specific topics related to the construction, agriculture, and public safety sectors are also scheduled. Special sessions cover issues such as connecting safety climate and culture to safety management, understanding and visualizing recent construction safety and health trends, and using workers’ compensation systems to conduct injury surveillance. Another special session discusses the best practices for worker safety with industrial mobile robots. We highlight these topics and more in a draft agenda on the NOIRS 2022 website.

We hope that by hosting NOIRS 2022 online, we will welcome more attendees who may not have been able to join us in person. Registerexternal icon for this free event now!

A curve speed warning system that notifies firetruck drivers to slow down as they approach potentially dangerous curves improved driving safety without sacrificing response time, according to recent research published in the journal Applied Ergonomicsexternal icon.

Firefighting is recognized as one of the most dangerous jobs. While the obvious risks are related to worksite dangers, firefighters also face hazards on the road as they rush to respond to the scene of a fire. In fact, vehicle crashes were the third-leading cause of work-related death among firefighters in 2017, causing the deaths of 10 firefighters, according to the United States Fire Administrationpdf iconexternal icon. Vehicle rollovers led to four of these deaths, with two of them occurring on a curve in the road.

To address this persistent risk, NIOSH researchers developed a computerized warning system by adapting existing guidelines for general vehicles to the unique design and emergency response driving speeds of firetrucks. Using a driving simulator in the NIOSH Vehicle Safety lab, they then tested the warning system with 24 active firefighters recruited to participate in the 2021 study. All of the participants were male, and their average age was 36 years.

Precarious employment typically refers to nonstandard, contract, low-wage, and insecure work. It is also associated with health risks, including anxiety and depression. Researchers at the University of Illinois at Chicago’s Center for Healthy Work aimed to create a health promotion initiative that improved the health of precariously employed workers, their families, and communities. The NIOSH-funded researchers recently published the results of the year-long project in Health Promotion Practiceexternal icon.

The initiative, called the Healthy Work Collaborative, focused on fostering connections between the health and labor sectors. It aimed to close gaps in the health sector’s knowledge and improve their ability to address precarious employment using multi-level, cross-sector strategies to affect policy, systems, and environmental change.

To evaluate the initiative’s effectiveness, researchers used surveys and interviews that showed the initiative met each of the goals. Nearly all—97%—participants said that the information improved their understanding of precarious employment, while 84% said that they used it to identify problems and solutions. Participants also reported a 53% increase in “networking” and a 21% increase in “collaboration/coordination” relationships. The findings suggest the Healthy Work Collaborative may be a model for building knowledge and skills to address precarious employment and other social determinants of health. 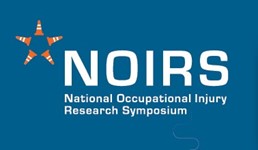 The March edition of the NIOSH Total Worker Health (TWH) quarterly newsletter is now available. This edition focuses on an essential and increasingly important component of worker well-being: mental health. Learn about TWH strategies that support workplace mental health, and find out how NIOSH implements TWH approaches within its own workforce. 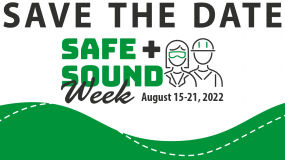 Mark your calendars! Join NIOSH, OSHA, and other partners for Safe + Sound Weekexternal icon 2022. The event will take place from August 15–21. Safe + Sound Week is a nationwide event held each August that recognizes the successes of workplace health and safety programs and offers information and ideas on how to keep America’s workers safe. Registration for Safe + Sound Week will open in early July. We look forward to your participation!

Webinar Recording Now Available: How Work Can Impact Mental Health and What Leaders Can Do

On February 14, the Total Worker Health Program hosted a live webinar and discussion on work, mental health, and leadership. Featured speakers, Dr. Leslie B. Hammer and Dr. Marie-Anne Rosemberg, presented their research and answered questions from the audience. Free continuing education is available for the recording. 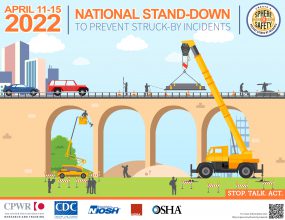 National Stand-Down to Prevent Struck-by Incidents
The National Occupational Research Agenda (NORA) Construction Sector Council is coordinating the annual National Stand-Down to Prevent Struck-by Incidentsexternal icon taking place April 11–15. During this event, the Struck-by Work Group will host several webinars on work zone safety, lift zone/heavy equipment safety, and dropped objects to raise awareness on these workplace hazards and what companies can do to prevent struck-by incidents. We encourage you to join in and spread the word!

Join Us for the Oil and Gas Extraction Summit
The Spring Health and Safety Summitpdf icon will cover state-of-the-art knowledge on occupational exposures to noise and heat stress in the upstream oil and gas industry, with representatives from NIOSH, OSHA, and upstream oil and gas industry partners. This free virtual event, hosted by the NORA Oil and Gas Extraction Council, and will be held April 6–7 from 12–4 p.m. (ET).  Registerexternal icon now!

New Publication on Occupation and Risk Related to Traumatic Brain Injury
A new articleexternal icon from the Southwest Center for Occupational and Environmental Health (SWCOEH) looks at traumatic brain injury in U.S. military service members by occupation and risk. This SWCOEH study is featured in the journal Military Medicine. The SWCOEH is one of 18 NIOSH-funded Education and Research Centers.

Updates from the Centers for Agricultural Safety and Health (Ag Centers):

Updates from the Centers of Excellence for Total Worker Health®: