September is National Preparedness Month and the current response and recovery efforts for Hurricane Harvey remind us of the importance of being ready for emergencies and disasters. This unprecedented event will demand a long term commitment to the recovery of the affected areas in Texas and Louisiana. It also underscores the importance of keeping responders and volunteers who are working on recovery activities safe and healthy.

This is also the 15th anniversary of NIOSH’s Emergency Preparedness and Response Office (EPRO).  NIOSH recognized the need for an office to coordinate emergency preparedness and response activities after the September 11, 2001, attacks at the World Trade Center and Pentagon, followed closely by the anthrax letter attacks.

EPRO plays a critical role in planning and coordinating NIOSH’s work to improve preparedness and response for all response workers ahead of the next disaster. When an emergency does strike, EPRO coordinates how our occupational physicians, epidemiologists, industrial hygienists, toxicologists, engineers, and others are mobilized to respond.

While we may not predict an emergency, we can prepare for them. NIOSH has guidance, resources, and tools to help employers, workers, labor unions, and professional organizations better prepare for a disaster before it happens, as well as resources that can be used during the response to protect the health and safety of response workers.

Even after immediate response activities end, workers continue to face hazardous conditions as recovery from a disaster begins. Recovery workers should be aware of the potential dangers associated with cleanup like electrical hazards, exposure to carbon monoxide from generators and hazardous materials, musculoskeletal hazards, structural instability, and confined spaces. The NIOSH Storm, Flood, and Hurricane Response topic page has information to help prepare for the potential dangers involved during clean-up and other recovery activities and the proper precautions to take to prevent work-related injuries and illnesses.

Additionally, recovery workers should also be mindful of stress and fatigue that are associated with working long hours while responding. To protect mental and physical health and personal safety while deployed, workers should do their best to maintain their own health and recognize the signs of stress and fatigue in themselves and their team members.

As a result of the well-documented health and safety deficiencies identified following the 2001 terrorist attacks, NIOSH—in collaboration with federal agencies, state health departments, and unions—created the Emergency Responder Health Monitoring and Surveillance (ERHMSTM) System.  ERHMS is a framework that allows an organization to monitor the health and safety of emergency responders throughout the predeployment, deployment, and postdeployment phases of response in order to protect emergency responders from illness and injury. NIOSH recently developed ERHMS Info ManagerTM, a free, custom-built software product that allows for the collection of data across all phases of a response and can also be used for calculations and analyses. NIOSH has also developed a user’s manual and training videos to accompany the software. More information on ERHMS, free online training, and ERHMS Info Manager is available on our ERHMS website.

While some emergencies may be more difficult to predict than others, it is critical to be prepared to respond to many types of events and to be aware of resources available. We hope you find these resources helpful in your own organizations. While disasters don’t plan ahead, you can.

Join NIOSH in Recognizing N95 Day—Today!
N95 Day is an annual NIOSH event that recognizes the importance of respiratory protection in the workplace and the importance of familiarizing yourself with the available resources to help make educated decisions when selecting and wearing a respirator. This year’s campaign continues to focus on N95 filtering facepiece respirators. However, we are expanding “Beyond the N95” and including information on some other types of respiratory protection. Join in the social media conversation by using the hashtag #N95Day. We are also hosting a N95 Day webinarexternal icon  today, Tuesday, September 05, at 1:00 PM EST. If you miss the webinar, it will be posted to the NIOSH website shortly after the event. To learn more, visit the N95 Day webpage.

Updated Fentanyl Resources Available for Workers
NIOSH has updated our Fentanyl topic page, Protecting Workers at Risk. On the new page, NIOSH identified four job categories where emergency responders might come into contact with fentanyl or its analogues: Pre-Hospital Patient Care, Law Enforcement, Investigation and Evidence Handlings, and Special Operations and Decontamination. NIOSH delineated the level of risk to responders into three categories—minimal, moderate, and high—and created a table that provides recommendations for personal protective equipment based on job category and level of risk. We have also updated the fentanyl resources page.

Save the Date: 2018 National Occupational Injury Research Symposium (NOIRS)
The National Occupational Injury Research Symposium (NOIRS) will be held October 16–18, 2018, at the Morgantown Marriott (formerly Waterfront Place Hotel) in Morgantown, West Virginia. For updates, check the NOIRS webpage. If you wish to receive email communications about NOIRS, email noirs@cdc.gov and we will add you to our mailing list.

NEW Fact Sheet—EMS Workers: How Employers Can Prevent Injuries and Exposures
More than 22,000 EMS workers visited emergency departments each year for work-related injuries, according to a four-year study. This new NIOSH fact sheet, co-branded with the National Highway Traffic Safety Administration, provides EMS employers with recommendations for preventing injuries and exposures among workers.

NIOSH Offers Webinar on Aging Workforce
The NIOSH National Center for Productive Aging and Work and the NIOSH Office for Total Worker Health® are co-hosting a free webinar, Interventions and Promising Practices in the Aging Workplaceexternal icon, as part of the Productive Aging and Work webinar series and in observance of National Employ Older Workers Week. In this webinar, presenters will provide an overview of interventions and promising practices for addressing the challenges and opportunities posed by an aging workforce. Join us on September 28 from 1:00 to 2:30 PM EDT. Continuing education credits are pending for this activity. Register hereexternal icon.

2016 Health Hazard Evaluation Program Annual Report Available
The NIOSH Health Hazard Evaluation (HHE) Program is pleased to share the 2016 annual report. The report includes summaries of interesting projects and other highlights of our year. We hope the report stimulates conversations about who the HHE Program is and how we make a difference for the health and safety of employees throughout the United States.

NIOSH Hearing Loss Researchers Collaborate on Study of Impulse Noise
Researchers from the NIOSH Hearing Loss Prevention Team participated in a multi-center study at the Quantico Marine Base in Quantico, Virginia, to characterize exposure from impulse noise and develop an empirical model that can be used to recommend guidelines for impulse noise exposure. The study was a joint collaboration of scientists and researchers from NIOSH, the U.S. Navy Office of Naval Research, the U.S. Air Force Research Laboratory, MIT Lincoln Laboratory, and Brigham Young University. The study is the largest of its kind to date and is expected to form the basis for future impulse noise research and dose-response. For more information and updates, follow @NIOSHNoise on Twitter. 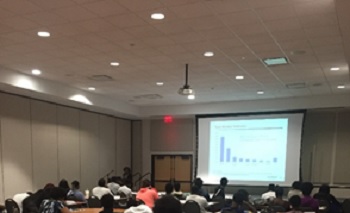 Savannah Implements Safety Matters Program for Working Youth
Recently, an American Industrial Hygiene Association (AIHA) member who works for Gulfstream in Savannah partnered with the Savannah Mayor’s Office to present the Safety Matters program to over 300 at-risk youth before they started their summer jobs with the city. Safety Matters is a program developed by NIOSH and AIHA to raise awareness among young people about workplace safety and health and to provide an understanding of the skills and knowledge they need to become active participants in creating safe and healthy work environments throughout their working lives.

Recently, NIOSH and the American Association of Occupational Health Nurses (AAOHN) renewed their agreement to continue collaborative efforts to identify workplace safety and health research needs, translate research into practice, and promote the health and protection of workers. NIOSH and AAOHN have a mutual commitment to creating a culture of safety and health and maintaining safe and healthful work environments. For more information, please contact Megan Casey.

An inmate on a forest work crew was electrocuted while using a chainsaw to cut into a tree that had fallen onto an 115,000-volt power transmission line. The worker died from electrocution at the scene.

A fire fighter/paramedic worked a 24-hour shift and responded to five calls. He then exercised for about 1 hour in the fire station’s gym. Soon after, he collapsed and was found unresponsive by crewmembers. He was transported to a hospital and was pronounced dead.

A volunteer fire fighter was dispatched to an unattended trash fire. He assisted in advancing the hose line and extinguishing the fire. He then complained of chest pain and was transported to a hospital. Approximately 14 weeks later, while still in the hospital, he died.

Noise Recommendations Provided to a Gray and Ductile Foundry

HHE Program investigators found one surgeon’s noise exposure exceeded the NIOSH REL, but all other surgical staff were below noise exposure limits. We estimated that surgeons could be overexposed to noise depending on the noise level during surgeries and length and number of surgeries in a work shift. We recommended including orthopedic surgeons in a hearing loss prevention program, using quieter surgical tools, and providing hearing protection. For more information click hereexternal icon.

Protecting Oil and Gas Workers from Hydrocarbon Gases and Vapors

Board of Scientific Counselors, National Institute for Occupational Safety and Health
The noticeexternal icon was posted on August 14. The meeting will be held on September 26, 8:30 a.m.–2:30 p.m., EDT.

Draft National Occupational Research Agenda for Cancer, Reproductive, Cardiovascular, and Other Chronic Disease Prevention
The noticeexternal icon was posted on August 9. Electronic or written comments must be received by October 10.

World Trade Center Health Program; Request for Nominations of Scientific Peer Reviewers of Proposed Additions to the List of WTC-related Health Conditions
The noticeexternal icon was posted on March 22. Nominations must be submitted postmarked or electronically received by February 1, 2019.