Reaching Our Audience Where They Are: Our Work with Wikipedia

Our challenge at NIOSH is to put our research into practice, turning the findings of our research into recommendations and best practices that will improve the safety and health of all workers. As we know from our experience that people are turning to Wikipedia for information, we want to make sure that the information there is complete, up to date, and free of errors. For the last two years, our ‘Wikipedians in Residence’ have been making improvements to Wikipedia articles, putting our latest research in front of Wikipedia’s millions of readers.

Our partnership with Wikipedia also includes adding video content. It is not often you come across videos while reading Wikipedia, but we are leading the charge in adding rich audiovisual content that goes above and beyond just reading plain text. Over the past several months we have uploaded 98 of our videos and have embedded most of them within Wikipedia articles. For example, when you go to the Wikipedia article on human factors and ergonomics,external icon you’ll also see our video, Practical Demonstrations of Ergonomic Principles. We are seeing great results from our efforts as our videos have been viewed on Wikipedia over 50,000 times since we started posting them in February 2016. In fact, some individual videos have been watched more on Wikipedia than on our YouTube channel. We are excited by the potential that videos have in spreading occupational safety and health information to our audience.

Wikipedia is a collaborative effort, supported by 30,000 volunteer editors around the world. Anyone can make an edit to an article, even you! At NIOSH we have already begun piloting a training program among some of our partners. Starting this year, we will be holding training sessions at our Pittsburgh and Cincinnati facilities for our NIOSH staff. We want to invite you to join us in this collaborative effort and hope that you will also help us by viewing and contributing to Wikipedia. To learn more about the NIOSH Wikipedia initiative contact Max Lum at mrl1@cdc.gov. You can get started today by looking through articles in Wikipedia that are of interest to you or see if there’s a need for new content. After all, if something is wrong on Wikipedia, why not fix it? 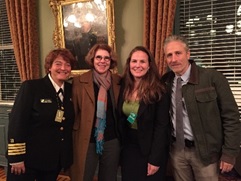 On December 13, NIOSH experts joined Vice President Joe Biden to provide expertise and input to the Cancer Moonshotexternal icon project. This bold initiative seeks to end cancer as we know it by advancing cancer prevention, diagnosis, and treatment. NIOSH’s work with first responders, including 9/11 responders, prompted the invitation to meet with Vice President Biden. Participants discussed how to share assets and experience that could help achieve the Cancer Moonshot. In attendance included Dr. Dori Reissman and Jessica Bilics from the World Trade Center Health Program; Dr. Teresa Schnorr from Division of Surveillance, Hazard Evaluations and Field Studies; and advocates for 9/11 responders Jon Stewart and John Feal.

On November 28, at the 2016 OSHA Oil and Gas Safety and Health Conference, representatives from NIOSH, OSHA, and the National STEPS Network signed a five-year extension of their alliance, which began two years ago.

Seated in the front of this photo are from left to right Jerry Jacobs and Joyce Ryel, Industry representatives of the STEPS Network; Dr. David Michaels, Asst. Secretary of Labor for OSHA; Dr. John Howard, NIOSH Director; Rick Ingram, National STEPS Network Founder. Behind the signatories are representatives of all three alliance member organizations present at the signing.

NIOSH researchers Eileen Kuempel, PhD, and Vladimir Murashov, PhD, were primary authors and co-chairs of the International Organization for Standardization (ISO) working group, which released ISO/TR 18637:2016, Nanotechnologies—Overview of available frameworks for the development of occupational exposure limits and bands for nano-objects and their aggregates and agglomerates (NOAAs)external icon, on November 21.

One-year Anniversary of Behind the Wheel at Work!

The NIOSH Center for Motor Vehicle Safety released the December issue of its quarterly eNewsletter, Behind the Wheel at Work. Highlights from the newsletter—which marks one year for the publication—includes an article on law enforcement officer motor vehicle safety, a new NIOSH infographic that answers the question Why does workplace motor vehicle safety matter? and a reader-requested, user-friendly tutorial helping employers find and interpret crash data that can help make the case for program resources.

NIOSH was saddened by the death of former CDC/NIOSH employee Dennis J. Viscusi. Dennis was a chemist in NIOSH’s National Personal Protective Technology Laboratory (NPPTL). Dennis spent 18 years as an analytical chemist with a NIOSH contractor prior to continuing his career as a full-time NIOSH employee in 2001. Dennis served as a chemist on important respiratory protection research projects such as Laboratory Tests for Total Inward Leakage, Development of Computer-Aided Face Fit Evaluation Methods, and Frequency of Fit Testing research before retiring from federal service. He contributed to many NPPTL projects related to fit and reuse. He was also a first-author of eight manuscripts that were published in peer-review journals. In addition, Dennis was either the author or co-author on more than 20 abstracts, presentations, and manuscripts.

Fred Blosser, NIOSH Associate Director for Communication
On December 31, Fred Blosser retired after 25 years of service in the federal government. Fred joined CDC/NIOSH in 1996 after working for the U.S. Environmental Protection Agency (EPA). He served as NIOSH’s public affairs and enterprise communication officer from 1996 to 2010, expanding the public affairs programs and serving as the editor-in-chief for NIOSH’s monthly e-newsletter to partners. In 2011 he took over the role of associate director of communication at NIOSH, with responsibility for managing the Institute’s channels of outreach to partners, stakeholders, the press, and the public at large, and coordinating with the CDC Communication Office to apply CDC communication policy and strategy.

Michigan Annual Report on Work-Related Asthma
Michigan released its 2015 Annual Report on Tracking Work-Related Asthma (WRA)external icon in Michigan. The two main features of this new report are (1) tables showing the use of common workplace allergens in companies in the 83 Michigan counties and the percentage of the workforce in each county working for those companies and (2) trends in Michigan since 1988 in the causes of WRA, industry and county where WRA occurred, and symptoms, smoking history, medical testing, and workers’ compensation status of workers reported with WRA.

New Total Worker Health Agreement with Indiana
Recently, NIOSH and Eskenazi Health in Indiana signed a new collaborative agreement. The purpose of the agreement was to promote the safety, health, and well-being of workers by recognizing Eskenazi Health as a NIOSH Total Worker Health® Affiliate that is committed to engaging in mutually beneficial activities to advance the goals of the NIOSH Office for Total Worker Health. This will be accomplished through activities such as research, research translation, and the development and promotion of appropriate programs, policies, and practices achieved through sponsorship of training, education forums, and other outreach initiatives. Academic institutions, labor organizations, nonprofit associations, government entities, and similar organizations interested in becoming a NIOSH TWH Affiliate may contact TWH@cdc.gov.

Construction Siding Subcontractor Installer Killed When Oversized Scaffolding Platform Destabilized and Telescopic Forklift Overturned—Kentucky
Two siding installers were standing on a platform secured to the forks of a rough terrain telescopic forklift. A foreman operating the forklift lost control and overturned, causing the platform to hit the ground. One of the installers was killed and the second installer was injured.

Measuring Worker Well-being for Total Worker Health—New
The noticeexternal icon was posted on November 14. Written comments must be received on or before January 13.

Request for Nominations of Candidates To Serve on the Board of Scientific Counselors (BSC), National Institute for Occupational Safety and Health (NIOSH)
The noticeexternal icon was posted on December 20. Nominations must be submitted postmarked or electronically received by January 31.

Closed-Circuit Escape Respirators; Guidance for Industry; Availability
The noticeexternal icon was posted on December 28. Comments must be received by February 27.

A Performance Test Protocol for Closed System Transfer Devices Used During Pharmacy Compounding and Administration of Hazardous Drugs; Extension of Comment Period
The notice was posted on December 8. Written electronic or written comments must be received by June 7.

Understanding Small Enterprises (USE) Conferenceexternal icon
Call for abstracts. Submissions are due January 15.

In January 1980, NIOSH issued recommendations to control workplace exposures to benzidine-based dyes, based on findings that the dyes increase the risk of bladder cancer. At that time, an estimated 79,000 workers in 63 different occupations faced possible exposure to the dyes. More information is available: Special Occupational Hazard Review for Benzidine-based Dyes.