Twenty Years and Counting: World-Class Research from the “L” Building 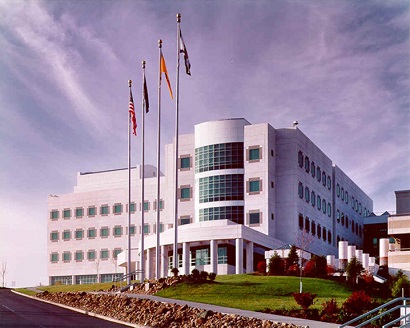 NIOSH will celebrate a notable 20th anniversary this month. On October 19, 1996, a new facility was dedicated on NIOSH’s Morgantown, West Virginia, campus. The facility, often referred to now as the “L” Building, provided NIOSH for the first time with a strategic convergence of specialized equipment and dedicated laboratory space for advanced health-effects research. Organizationally, the responsibilities for those studies were delegated to a newly created Health Effects Laboratory Division (HELD). At the same time, the facility added vital work space and expanded research opportunities for the existing Morgantown divisions—the Division of Respiratory Disease Studies (now the Respiratory Health Division) and the Division of Safety Research.

The inauguration of new research in Morgantown was a landmark event for NIOSH in many ways. At the crossroads of the 20th and 21st centuries, the ability to conduct cutting-edge health-effects studies added immeasurably to our scientific repertoire. By expanding our knowledge about the complex processes through which illnesses occur and progress, it gave us significantly greater power to further reduce the toll of the legacy diseases associated with traditional occupations and industries. The nation had made great inroads since the 1970s, but continued success demanded increasingly sophisticated knowledge. At the same time, with those new capabilities, we could better predict the implications of the rapidly changing American economy for worker health in the new millennium.

The new facility gave us a competitive advantage, too, in recruiting talent to the occupational safety and health field. The promise of doing world-class research in a state-of-the-art working environment was a strong inducement for attracting innovative, highly trained men and women who might otherwise have sought careers in other health fields. The new facility brought over 200 new jobs into the Morgantown area, benefitting the local economy and strengthening our ties with West Virginia University and other respected research partners.

The dignitaries who participated in the 1996 dedication, notably the keynote speaker, the late Senator Robert C. Byrd, predicted a bright future for the L Building as a centerpiece for service to the nation’s heath.  We at NIOSH are proud that those predictions have been realized many times over in the 20 years since. The facility dedicated in 1996 has been instrumental in generating new scientific knowledge across the wide spectrum of 21st-century occupational health and safety needs.

For example, with the strategic research space and advanced equipment that the facility affords, we have been able to continue progress at a robust pace against persistent ills of the workplace, such as asbestos-related diseases, coal workers’ pneumoconiosis, traumatic injury, and musculoskeletal disorders. At the same time, the research out of the L Building has contributed significantly to the past 20 years of national decision-making on emerging issues that were only beginning to gain visibility in the 1990s. Those issues include nanotechnology, emergency responder needs in disasters of natural and human origin, protection of the healthcare workforce against novel and pandemic diseases, and implications of greater workforce diversity for the correct fit of life-saving safety equipment.

In all of those areas of research, the nation has benefitted not only from the cutting-edge science practiced in the L Building, but also from the facility’s role in advancing collaboration and professional development. This is true whether we speak of external collaboration with private- and public-sector partners in initiatives such as the National Occupational Research Agenda, which also made its debut in 1996, or whether we refer to today’s new era of “virtual” teamwork across NIOSH’s geographically dispersed locations.

There are many other accomplishments, findings, and products that have resulted either directly or indirectly over the past 20 years from the construction of this facility. Please follow the NIOSH Science Blog to read more later this month.

NIOSH has established a new group on LinkedIn to highlight research, products, conferences, etc. for the Institute. If you have a LinkedIn account you can join and contribute here. If you don’t have an account, you can sign up and then join the group. NIOSH joins other LinkedIn program groups with which we are affiliated, such as Total Worker Health, Buy Quiet, and Work Organization and Stress.

Latest Issue of Behind the Wheel at Work Now Available!

The NIOSH Center for Motor Vehicle Safety recently released a new issueexternal icon of its quarterly eNewsletter, Behind the Wheel at Work. Highlights from the latest issue include a feature on Business Pulse: Motor Vehicle Safety at Workexternal icon, a “cheat sheet” cheat sheet of go-to road safety resources, and a Q&A with Johnson & Johnson’s Worldwide Fleet Safety Director.

NIOSH and the Labor Occupational Health Program (LOHP) at the University of California, Berkeley are pleased to announce the publication Staying Safe at Work:  A Curriculum for Teaching Workers with Intellectual and Developmental Disabilities about Health and Safety on the Job. Staying Safe at Work is a six-lesson training program designed to teach basic occupational safety and health knowledge and skills to young and older workers and students with disabilities The curriculum can help teach students or consumers/employees the foundational job safety and health skills that all workers need. The curriculum uses highly interactive and fun learning activities to teach foundational workplace safety and health skills, which are general, transferable, and applicable across all jobs and industries.

The July 17, 2015, MMWR report, Investigation of Childhood Lead Poisoning from Parental Take-Home Exposure from an Electronic Scrap Recycling Facility—Ohio, 2012, has been translated into Chinese and published in the Shanghai Evidence-based Report on Preventive Medicine, which is similar to MMWR.

International Classifications of Diseases, Tenth Revision, Clinical Modification (ICD-10-CM) will add “Overexertion and strenuous or repetitive movements (X50)” as a new category of external causation codes. Comparable codes were available in ICD-9-CM, but based on early input from stakeholders, the codes were deactivated. The added codes will improve surveillance of work-related injuries using ICD-10-CM. The Ohio Bureau of Workers’ Compensation initiated the original request to NIOSH to add external causation codes comparable to the previous category, “Overexertion and strenuous movements (E927.0).” NIOSH led a workgroup of ergonomic experts to develop and propose new codes.

On August 23, NIOSH representatives participated in a discussion by federal agency representatives at the National Institute of Standards and Technology on needs and means for developing technical performance standards for exoskeletons in industrial settings. The meeting included a presentation by NIOSH’s Steve Hudock on NIOSH’s research laboratory capabilities for conducting scientific measurements of exoskeleton performance, including researcher expertise, measurement devices, camera systems, and other hardware/software for analysis. Others there from NIOSH were Christine Branche, Ren Dong, Brian Lowe, Tom McDowell, and John Wu. The participants tentatively scheduled a meeting for January 2017 to include input from representatives of academia and industry.

NIOSH was saddened to learn of the death of our colleague and friend, Pengfei Gao, Ph.D., CIH. Dr. Gao joined NIOSH in 1996. He served as the Personal Protective Equipment Coordinator for NIOSH’s Nanotechnology Research Center. He was internationally recognized for his research on chemical protective clothing. Recent projects included work on protective gown research stemming from the Ebola outbreak (see attached photo from the CDC honor awards ceremony in April). Throughout his career, Pengfei served as a mentor to many summer students, junior researchers, and postdoctoral fellows. Dr. Gao was the author or co-author of 30 manuscripts published in peer-reviewed journal and several NIOSH numbered documents.

Supervisor of the Year
Congratulations to Christina Lawson for being selected as the 2015 Supervisor of the Year by the American Federation of Government Employees Local 3840 at the NIOSH Cincinnati location. This award promotes a sense of caring and respect within NIOSH that is crucial to teamwork in the workplace. Christina was selected from among several outstanding supervisors for continually striving for fair and equitable compensation for her employees, ensuring the individual dignity of each employee, providing an atmosphere of free expression, guaranteeing “fair play” to all, sparing no effort to provide safe working conditions, and helping make employees feel involved, important, and appreciated. The nominees were John Gibbins, Lauralynn McKernan, John Piacentino, Steve Schrader, John Snawder, Jennifer Topmiller, Donna Van Bogaert, and Andrew Weathers.

New NIOSH Total Worker Health® Affiliate Agreements
Recently, new collaborative agreements were signed between NIOSH and the Industrial Minerals Association—North America (IMA-MA), AgriSafe Network, Interdisciplinary Center for Healthy Workplaces, and the University of Buffalo Industrial and Systems Engineering Department. The purpose of these agreements is to engage in mutually beneficial activities to advance the goals of the NIOSH Office for Total Worker Health® and promote the safety, health, and well-being of workers. Academic institutions, labor organizations, nonprofit associations, public sector entities, and similar organizations interested in becoming an affiliate may contact TWH@cdc.gov.

Flatbed Truck Starts on Its Own, Crushing Auto Body Shop Worker—New York
A worker of an automobile body shop was fatally crushed by a flatbed truck in the shop. The worker was working alone, and the parking brake was not set and the wheels were not chocked. The truck rolled forward and crushed the worker, and he died from his injuries.

Truck Driver Fatally Injured When the Forklift He was Operating Falls off a Loading Dock—Massachusetts
A truck driver was fatally injured while operating a stand-up forklift on an elevated loading dock at a produce center. The forklift fell off the loading dock, causing the victim to fall out of the forklift. The worker died from his injuries 5 days later.

Update IEQ Recommendations for a Juvenile Court and Detention Building
Although HHE Program investigators saw no widespread mold, water damage, or sewage problems, we did find temperatures were not within recommended comfort guidelines and the ventilation system had deficiencies. We recommended conducting a comprehensive ventilation assessment and stopping environmental sampling for chemicals and biological agents. For more information click hereexternal icon.

NIOSH Health Draft Immediately Dangerous to Life or Death (IDLH) Value Profile for Peracetic Acid (CAS#79-21-0)
The noticeexternal icon was posted on August 11. Electronic or written comments must be received by October 11.

NIOSH Center for Motor Vehicle Safety: Midcourse Review of Strategic Plan
The noticeexternal icon was posted on August 15. Written comments must be received by October 14.

Survey of Musculoskeletal Disorders Prevention Tools/Methods:10-year Follow-Up—New
The noticeexternal icon was posted on September 26. Written comments should be received within 30 days of this notice.

Evaluation of Effectiveness of NIOSH Publications (OMB Control No. 0920-0544, Expired 4/30/2010)—Reinstatement with Change
The noticeexternal icon was posted on September 19. Written comments must be received on or before November 18.

A Performance Test Protocol for Closed System Transfer Devices Used During Pharmacy Compounding and Administration of Hazardous Drugs
The noticeexternal icon was posted on September 15. The public meeting will be held on November 7, 9:00 a.m.–3:00 p.m. Eastern Time, or until after the last public commenter has spoken, whichever occurs first. Electronic or written comments must be received by December 7.

Twenty years ago, NIOSH dedicated its state-of-the-art laboratory in Morgantown, West Virginia, significantly expanding its capabilities to conduct research on complex and emerging occupational health hazards. This was a milestone in the long history of NIOSH and predecessor agencies in the state of West Virginia, dating back to 1967. More information is available on The History and Future of NIOSH Morgantown blog.