This month I’m pleased to share with you that 2017 marks the 50th anniversary of occupational respiratory disease research at the NIOSH facility in Morgantown. In 1967 the Appalachian Laboratory for Occupational Respiratory Disease (ALFORD) was established within the U.S. Public Health Service, and in 1971 it became part of NIOSH. In 1977 ALFORD was renamed the Division of Respiratory Disease Studies (DRDS), which is now the Respiratory Health Division (RHD).

Respiratory health research conducted at the Morgantown facility was transformed by the Federal Coal Mine Health and Safety Act of 1969 (Coal Act) and its entry into NIOSH after the Occupational Safety and Health Act of 1970 (OSH Act). The Coal Act assigned official responsibilities for research and service to prevent coal mine dust–induced lung disease, and these are still relevant and important today. The OSH Act and affiliation with NIOSH expanded ALFORD’s mission to advance prevention of work-related respiratory disease across the spectrum of occupations and industries. This also continues be a very important focus for NIOSH, since work-related respiratory disease continues to be one of the most important work-related health issues.

Over the years, NIOSH has made great impacts in addressing occupational respiratory disease issues by working in partnership with industry; labor; academia; federal, state, and local government agencies; and others. NIOSH’s efforts include these examples:

In reflecting on past accomplishments and planning for the future, NIOSH is co-sponsoring an occupational respiratory symposium on August 10, 2017, with West Virginia University (WVU), a long-time partner celebrating its own 25th anniversary of the WVU Occupational Medicine Training Program. The symposium will be held in WVU’s Health Sciences Center and will bring together a multidisciplinary group of occupational health scientists to discuss local and national issues related to prevention of occupational respiratory disease. Further information on the symposium is posted on NIOSH’s new Respiratory Health at Work website, which also provides up-to-date information and links to various programs within RHD and from across NIOSH. You can also follow RHD on Twitter at @NIOSHbreathe. I invite you to participate in the event!

CDC Releases 2018 Yellow Book
CDC Health Information for International Travel (commonly called the Yellow Book) is now available. For the first time, the Yellow Book includes a section on work-related travel. This is an important document for healthcare providers who work at travel clinics where people may be getting vaccinations, as well as for occupational health doctors.

Survey Finds Private Dental Practices Lacking OSHA Exposure-Control Plans for Bloodborne Pathogens
Findings from a web-based survey conducted by NIOSH and the Organization for Safety, Asepsis, and Prevention showed that over a quarter of private dental practices that participated in the survey did not have a written site-specific plan for controlling exposure to bloodborne pathogens. This studyexternal icon is one of the first to examine extent of awareness of and compliance with OSHA’s bloodborne pathogens standard in private dental practices, particularly with respect to having an exposure control plan. This information supports the need for increased continuing education and training on methods to prevent occupational exposure to bloodborne pathogens in dental settings. Learn more.

NIOSH Study Looks at Use of Nasal Scavenging Masks on Dental Patients to Control Nitrous Oxide
According to a new articleexternal icon from NIOSH, scavenging systems that prevent nitrous oxide gas from escaping into the dental operatory are widely used. However, adherence to other recommended precautions during dental procedures is lacking. The findings from this survey will help NIOSH, its partners, employers, and healthcare workers better understand current health and safety practices for working with hazardous chemical agents and identify gaps in knowledge about those practices. NIOSH, in collaboration with partners, plans to design further research for addressing those gaps. Learn more. 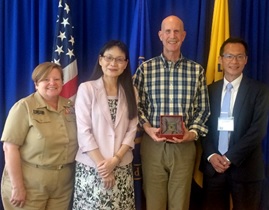 New FACE Program Information Available
A new flyer from NIOSH provides information on the NIOSH Fatality Assessment and Control Evaluation (FACE) Program and state FACE programs. This flyer contains information about the programs as well as materials available to keep workers safe on the job.

Division of Safety Research Celebrates 40th Anniversary
The NIOSH Division of Safety Research (DSR) celebrated its 40th anniversary in June. DSR serves as the focal point for the nation’s research program for preventing traumatic occupational injuries, such as from motor vehicle crashes, falls, workplace violence, machinery-related events, confined-space incidents, and electrocutions. DSR staff and alumni joined to celebrate the event and their many meaningful contributions to worker safety and research over the years.

Updates on Talking Safety
Having limited fluency in the language makes young, non-English-speaking workers a particularly vulnerable group. To serve Spanish-speaking youth, an edition of Youth@Work—Talking Safety, the NIOSH young worker curriculum, has been translated into Spanish. The Spanish translation of the Florida edition is now available. Spanish translations of the California, Oklahoma, and Texas editions will be coming soon. 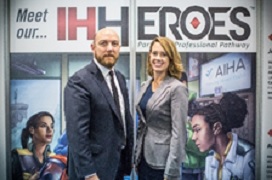 This year’s American Industrial Hygiene Association (AIHA) President’s Award was presented on June 7 in Seattle, Washington, to Rebecca Guerin, a social scientist with NIOSH and coordinator of the NIOSH Safe-Skilled-Ready Workforce program. In this capacity, Rebecca and her team collaborated with outgoing AIHA president Dr. Steven Lacey on the development and dissemination of Safety Matters, a free, one-hour training module. The interactive module has information on occupational safety and health that is critical for young people to know before entering the workforce.

Engineered nanomaterials are being used in ever-increasing volumes to improve the performance of a rapidly-growing number of consumer products. The traditional role of the Industrial Hygienist in assessing and managing workplace risks of nanotechnology requires skills that can also be applied in managing the potential risks of nanoproducts throughout their life cycle. The AIHA Nanotechnology Working Group recently collaborated with members of the Product Stewardship Society to develop a guidance document for nanomaterials. This guidance documentexternal icon defines the key activities of Product Stewardship and describes how occupational health and safety skills can complement and support effective stewardship for nanomaterials and nanoproducts throughout their life cycle. Dr. Chuck Geraci of NIOSH was a member of the six-person team who developed the document and received the AIHA Outstanding Project Team Award.

Expanding Research Partnerships: State of the Science was convened June 21–23 in Aurora, Colorado. The conference brought together NIOSH scientists and NIOSH-funded extramural researchers. One of the two conference goals was to launch the third decade of NORA, accomplished through a plenary presentation and topic table discussion. Scientific presentations were organized by sector and cross-sector.

The New Hampshire (NH) Comprehensive Cancer Collaboration’s Equity Task Force was convened in 2015 to examine employment data as a way to delve into the prevalence of cancer screening rates and explore opportunities to reach vulnerable populations. In order to do this, the task force used the “industry” field in the NH Behavioral Risk Factor Surveillance System to analyze preventive cancer screening rates for the primary NH industries. Focusing on breast, cervical, and colorectal cancer screenings, the task force considered industries with both male and female workers across the span of adulthood, with the highest likelihood of social diversity. Results indicate that the lowest prevalence of preventive cancer screening, compared with the general population, are in the Accommodation and Food Services industry. This reportexternal icon highlights efforts focused on outreach and dissemination to that industry.

NIOSH and NOCTI (formerly the National Occupational Competency Testing Institute) recently established a partnership agreement. NOCTI is a non-profit organization that develops and administers career-based competency assessments and recognizes the benefits of a collaborative partnership to promote and advance occupational safety and health practices among young workers. Through this agreement, NOCTI will administer the online assessmentexternal icon of the NIOSH Youth@Work: Talking Safety curriculum to participating middle and high school students. It will provide a digital badge as a certificate of completion for those students earning a passing grade on the assessment. This partnership is vital to nationwide dissemination of the NIOSH young worker curriculum and to preparing young people for a lifetime of safe and healthy work. For more information, contact Rebecca Guerin, Coordinator, NIOSH Safe-Skilled-Ready Workforce Program, at (513) 533-8435 or RGuerin@cdc.gov.

A laborer at a geothermal facility died when he fell into an open 24-foot-deep vertical pipe. A pump had recently been removed, exposing the top end of the pipe, which was at ground level. When the victim stepped on the jacketing, he fell through the hole into liquid isopentane at the bottom of the pipe and suffocated.

A captain performed fitness training by walking on a treadmill at his fire station. After exercising for about 20 minutes, he ate dinner and went to take a shower. About 75 minutes later, a crew member found the captain unresponsive in the shower room. The captain was pronounced dead at the station.

Finding low levels of diesel exhaust in all areas of the two fire stations, HHE Program investigators confirmed that air flowed from the apparatus bay into the living quarters, the opposite of what is preferred. The investigators recommended improving the ventilation systems at both stations and installing diesel control systems to decrease the amount of exhaust in the apparatus bay. For more information, click hereexternal icon.

HHE program investigators found that work-related eye and respiratory symptoms were about 5 times more common among employees who worked in the waterpark than in other parts of the resort. The ventilation systems were not operating properly and did not meet current standards and guidelines. The investigators recommended the waterpark improve the ventilation systems to ensure enough air movement and proper dilution and removal of air contaminants. For more information, click hereexternal icon.

The noticeexternal icon was posted on May 31. Written comments must be received on or before July 31.

The noticeexternal icon was posted on March 22. Nominations must be submitted (postmarked or electronically received) by February 1, 2019.

Occupational Safety and Health: Recognizing Accomplishments and Planning for the Future
The deadline for poster abstracts is July 7.