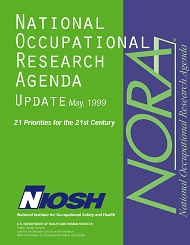 Evidence of the continued success of the National Occupational Research Agenda (NORA) can be found in this third annual NORA Update. Funding and support of NORA, both intramurally and extramurally, increase yearly. The NORA grants program has also been a huge success. In FY 98, NIOSH and four NIH partners awarded 50 grants totaling about $8 million dollars in ten NORA priority areas. This represents the largest ever single infusion of extramural funding for investigator-initiated occupational safety and health research. The FY 99 Request for Applications (RFA) for NORA research looks just as promising. NIOSH and five NIH Institutes are expected to award more than $7.5 million in eight NORA priority research areas. Despite these successes, NIOSH and its partners are aware that extramural researchers still face disappointing odds when submitting their applications in these high priority areas – with current funding allowing only 14% of approved grants to be funded (compared to a success rate of over twice that in other areas funded by the NIH). It is NIOSH’s goal to increase success rates in the next few years. While the accomplishments are captured in this document, the true essence of NORA will be found at the NORA Symposium 1999: Partnership for Research. This second symposium highlights the successes of NORA and brings together over 300 NORA participants and supporters from across the country. It is this strong public-partnership network that has made NORA a success. Individuals and organizations throughout government, labor, industry, and academia continue to believe in the importance of and need for this national agenda. As the title suggests, this year’s theme is partnership. Partners from many sectors will discuss their experiences in using NORA to improve worker safety and health. The wide range of NORA partners willing to speak on behalf of NORA says more about the universality and usefulness of NORA than any words. Also at the Symposium, the first NORA Partnership Award For Worker Health and Safety will be presented to the Asphalt Partnership. This unique collaboration of government, industry, and labor embodies the true spirit of NORA partnership. This partnership was also selected as a finalist in the Ford Foundation 1998 Innovations in American Government awards program. NIOSH decided to honor partnership because it is through continued partnership that NORA will achieve its full potential. The full potential is beyond our current optimistic thinking, if NORA’s first three years are any indication.