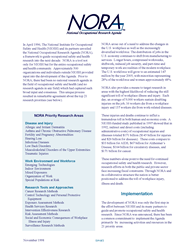 NORA arose out of a need to address the changes in the U.S. workplace as well as the increasingly diversified workforce. The distribution of jobs in the U.S. economy continues to shift from manufacturing to services. Longer hours, compressed workweeks, shift work, reduced job security, and part-time and temporary work are realities of the modern workplace. The U.S. workforce will grow to an estimated 147 million by the year 2005, with minorities representing 28% of the workforce and women approximately 48%.

NORA also provides a means to target research in areas with the highest likelihood of reducing the still significant toll of workplace illness and injury. Each day, an average of 9,000 workers sustain disabling injuries on the job, 16 workers die from a workplace injury and 137 workers die from work-related diseases.

These numbers alone point to the need for continued occupational safety and health research. However, research efforts in both the public and private sector face increasing fiscal constraints. Through NORA and its collaborative structure the nation is better positioned to address the toll of workplace injury, illness and death.

The development of NORA was only the first step in the effort between NIOSH and its many partners to guide and promote occupational safety and health research. Since NORA was announced, there has been a common commitment to implement the Agenda primarily by increasing activities and resources in the 21 priority areas.

Twenty Partnership Teams (the two musculoskeletal priority research areas are being addressed by one team) were formed to assist in the implementation of the agenda. Each team consists of a team leader, NIOSH researchers, and external partners. The 20 Partnership Teams have brought together 120 NIOSH researchers and 150 external members including representatives from academia, labor, industry, health and safety organizations, the insurance industry and other government organizations.

Early in the NORA process, NIOSH made a commitment to redirect some of its resources to the 21 NORA priority areas. Out of an overall operating budget in FY 96 of $165.3 million, the NIOSH baseline investment in the NORA priority areas was $15.4 million (approximately 9% of the budget). Of this, $8.7 million was devoted to intramural research (NIOSH-conducted) and cooperative agreements (NIOSH-funded extramural research that NIOSH initiates and participates in) and $6.7 million for research grants (extramural investigator-initiated projects). A redirection of resources in FY 97 nearly doubled this investment to $28.1million.

A new $5 million special Congressional appropriation to NIOSH in FY 98 for NORA, coupled with additional reinvestment of baseline monies into NORA priority areas, resulted in an estimated $46.9 million of research (about 25% of the budget) in NORA priority areas for FY 98. Such an increase is tangible evidence of NIOSH’s commitment to NORA. This shift is particularly notable given existing Congressional mandates and obligations that limit how much of the budget can be redirected.

The Federal Liaison Committee was instrumental in conducting the first-ever Federal survey of occupational safety and health research. The survey identified a total of only $204 million for all occupational safety and health research from all Federal sources. The FY 96 baseline for NORA from non-NIOSH Federal sources was about $15 million. Federal partners have agreed to perform the survey biannually. The next survey will assess FY 98 expenditures.

Further successes for NORA include NORA’s selection as a semifinalists for the prestigious Innovations in American Government Award sponsored by the Ford Foundation and administered by Harvard University’s John F. Kennedy School of Government. The number of organizations using NORA as a model for creating research agendas or other types of partnership and planning is also noteworthy. Examples include the Italian National Institute for Occupational Safety and Health, the Department of Defense and the Chemical Industry Institute of Toxicology.