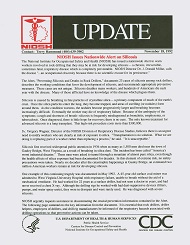 NIOSH issued a nationwide alert, that warned workers involved in rock drilling of their risk of silicosis, a chronic, irreversible, sometimes fatal respiratory disease. Silicosis disabled many workers and some afflicted have no knowledge of the disease plaguing them. Silicosis occurs when crystalline silica from the earth’s crust is breathed in. In the lungs, the silica becomes entrapped and nodules (swelling) form around them. Breathing worsens when nodules become larger. There is no cure for silicosis and lung transplants are the only treatment. America’s worst industrial disaster occurred in 1936, when 1,500 men died near Gauley Bridge, West Virginia, from breathing in silica dust. Although the health risks of silica were known in 1936, no precautions were taken. Today, two million American workers continue at risk for silicosis, including workers in quarries, caisson, construction, mining, and tunnel and highway construction. Workers should be protected by using wet drilling and ventilation to limit exposure to silica; conducting air monitoring to measure exposure of workers; providing training; wearing washable or disposable clothes; using respiratory protection; and having periodic medical examinations.