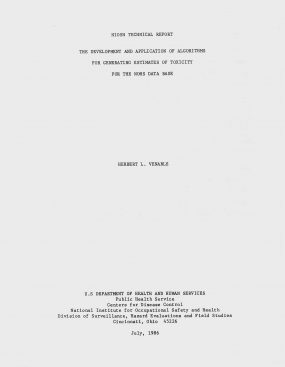 Computer based algorithms were developed and applied to the chemical compounds listed in the NIOSH National Occupational Hazard Survey database to generate estimates of toxicity for these compounds for the median oral toxic dose in rats, mutagenicity, carcinogenicity, and teratogenicity potentials. All four algorithms which were developed contained the assumption that a structure/activity relationship existed among groups of compounds that exhibited similar chemical characteristics. While these algorithms did not directly address the problem of metabolism of parent compounds into other more or less toxic compounds, they did so indirectly as the toxic effects noted and reported were used as the basis for assigning a toxic or nontoxic status to the parent compound. These algorithms did not consider site of toxic effect, type of cancer, or the actual cause of death in the case of the median lethal dose (LD50) algorithm. The author concludes that these models can serve as tools for investigating the potential toxicity of compounds, although they cannot be used in place of animal test data.