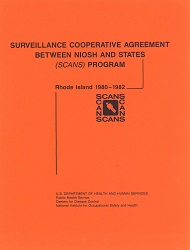 This report summarizes Surveillance Cooperative Agreement between NIOSH and States (SCANS) Program activities undertaken by the Rhode Island Department of Health during September 1980 to February 1982. The report covers the use of population based measures of mortality in assessing occupational hazards, the use of Sentinel Health Event (SHE) concept in analyzing Rhode Island mortality and hospital discharge data, the dissemination of findings from activities, and recommendations for future occupational health surveillance activities. The major activities under the agreement include the coding of the occupational and industrial statements and death certificates for all Rhode Island resident decendents during the years 1973 to 1978, the production of Proportionate Mortality Ratios (PRM) by age, sex, industry, occupation, and cause of death, and application of the Sentinel Health Event/Occupational Disease (SHE/OD) list to both Rhode Island hospital discharge and mortality data. Planned future activities include the coding of death records for the years 1979 to 1981 to permit the computation of SMRs and PMRs by occupation, industry, age, sex, and cause of death for the time period during the 1980 census; the continued refinement of the SHE/OD methodology for use on a statewide basis; and the field testing of a hospital based SHE/OD surveillance system.