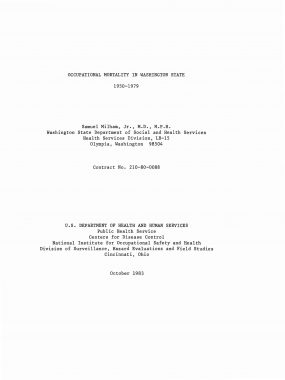 Information concerning the deaths of 429,926 men and 25,066 women occurring in Washington State from 1950 through 1979 was reviewed. This information dealt with the occupations of these individuals and cause of death. The men were divided into 219 occupational categories and the women, 51. A detailed cause of death analysis involving 160 causes was published for each of these categories. A comparison was made between the occupational mortality findings and those of the Registrar General and with the published occupational mortality literature. In general the mortality pattern of the Washington State study was consistent with both the Registrar General’s mortality findings and those published in the literature. Specific findings which warrant further study include an increased lung cancer mortality for workers at the ASARCO Tacoma copper (7440508) smelter, increased mortality due to multiple myeloma and pancreatic cancer in workers at the Hanford atomic energy facility, and excess mortality due to cancer of the pancreas, lymphoma, leukemia, and emphysema in aluminum (7429905) workers. An increase in leukemia was noted in workers exposed to electric and magnetic fields and a deficit of multiple sclerosis deaths was found among those who work outside. Tabular data is presented on male mortality by occupation, female mortality by occupation, occupations ranked by proportionate mortality ratio (PMR) within each cause of death (males only), and causes of death with significantly (P less than