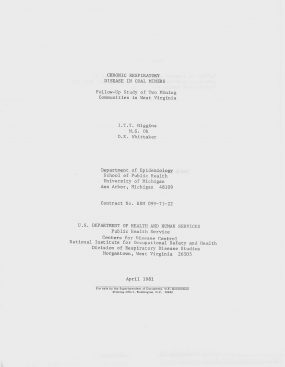 A follow up study was conducted of chronic respiratory disease in coal miners in Mullens and Richwood, West Virginia. From 1972 to 1974 a follow up of all persons who were living in Mullens and Richwood in 1963 to 1964 was carried out. In addition, a new census was taken and an attempt was made to examine all men and women aged 20 to 74 years old. The examination included a British Medical Research Council respiratory symptoms questionnaire, occupational history, measurement of ventilatory lung function and postero anterior and lateral chest radiographs. The mortality rate was higher in miners and ex miners than in non miners. In each town, standardized mortality ratios were slightly above those expected for West Virginia; those for miners and ex miners were appreciably elevated with the ratio in Mullens on the border line of significance at the 5 percent level. High ratios were found in both towns in miners and ex miners for respiratory diseases with ratios higher in smokers than in non smokers. Radiographic changes of pneumoconiosis were detected in 23 percent of miners and ex miners in Mullens and in 11 percent in Richwood. Early degrees of progressive massive fibrosis were recorded in 5 percent of miners in Mullens and in 2 percent in Richwood.