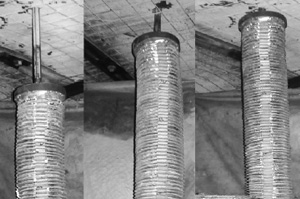 As the bit drills into the roof, the sound barrier spring is pushed down by the rock and noise levels are reduced.

U.S. workers are losing their hearing at an alarming rate, making hearing loss the most common job-related ailment in the United States. In any given year, 22 million workers will be exposed to sound levels strong enough to damage their hearing.

Miners are among the hardest-hit workers because they use large and noisy machines in tightly enclosed spaces. By the time they turn 50, nearly 90% of coal miners have some hearing loss. For comparison, only 10% of the U.S. population not exposed to loud noises at work has hearing loss by age 50.

Among the loudest pieces of mining equipment are roof bolting machines, which can expose a worker to more than 100 dB(A) while drilling. These large electric machines play a vital role in helping to shore up ceilings in mines, but the intensity of the sound they produce takes a toll on the hearing of mine workers.

The National Institute for Occupational Safety and Health (NIOSH) has been a leader in developing ways to minimize dangerous noise levels in U.S. workplaces. A team of researchers in the NIOSH Office of Mine Safety and Health Research recognized the need and led a project to reduce the harmful noise levels produced by roof bolting machines.

NIOSH formed partnerships with organized labor groups, coal mining industry groups, and mining equipment manufacturers to study ways to reduce the noise produced by roof bolting machines. First, NIOSH researchers studied where a roof bolting machine emits the most noise while drilling. They found that drill steel produces the most noise at the end where it makes contact with the rock and at the end where it is attached to the drill chuck. This information allowed researchers to design and build a collapsible drill steel enclosure (CDSE) that surrounds the drill steel and absorbs some of the sound before it reaches the machine’s operator. The CDSE is wrapped around a spring that has a gap on the end allowing the machine operator to see the tip of the steel as it begins to drill. As the bit drills into the roof, the sound barrier spring is pushed down by the rock (see image).

At mining sites where the CDSE has been tested, time-weighted noise exposures fell by up to 7 dB(A) over an 8-hour work shift. In addition, the device performed well enough to be considered “promising” by the Mine Safety and Health Administration on program information bulletins used at mine sites. Widespread use of this device could help reduce hearing damage caused by the roof bolting machine. The process of studying and designing the device also proves that progress can be made to make workplaces safer when government, industry, unions, and equipment manufacturers work together for a common goal.