Go back to Workshop Index page. 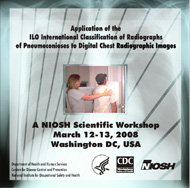 DISCLAIMER: The findings and conclusions in these proceedings are those of the authors and do not necessarily represent the official position of the National Institute for Occupational Safety and Health (NIOSH). Mention of any company or product does not constitute endorsement by NIOSH. In addition, citations to Web sites external to NIOSH do not constitute NIOSH endorsement of the sponsoring organizations or their programs or products. Furthermore, NIOSH is not responsible for the content of these Web sites.

Since the early decades of the 20th century, standard posterior-anterior (PA) film-screen chest radiography (FSR) has been the primary method for screening, diagnosis, medical monitoring and epidemiological study of the pneumoconioses. In the 1930’s the International Labour Office (ILO) based in Geneva, Switzerland, became involved in the development and evolution of a scoring system for standardizing the classification of radiographs for pneumoconioses. The system has undergone multiple revisions, most recently in 2000.2 The ILO system is predicated on use of films screen radiology (FSR) remains the most widely used method for classifying chest radiographs for pleural and parenchymal abnormalities related to inhalation of pathogenic dusts.

The goal of the present investigation was to assess the impact of chest radiograph image format, including FSR, soft copy (SC), and hard copy digital imaging (HC), on the results of ILO classifications performed by experienced readers on images of individuals with abnormalities of the lung parenchyma and/or pleura that may result from dust inhalation. In particular, we sought to examine the impact of image format on both the reliability of classification results and the prevalence of findings.

This study was approved by the Medical Institutional Review Board of the University of Michigan. One hundred seven subjects were recruited from the University medical clinics and the Michigan and Ohio silicosis registries. A questionnaire recorded demographics, smoking history; occupational history; and past medical history. Height and weight were measured. A standard PA FSR image and a PA DR image were obtained on the same day. No other tests were performed as part of this investigation.

Each B-reader classified each image in each format (FSR, HC-DR, SC-DR) on two separate occasions. The formats were presented in random order. Within each image format, the images were also presented in random order. There was at least 30 days between each reading cycle for each reader. All readers employed high-resolution physician-quality diagnostic display monitors when reading SC images. With permission from the ILO, the entire set of ILO 1980 standard films was digitized and archived for display side-by-side in classification of soft copy subject images. B-readers recorded classifications using forms consistent with the 2000 revision of the ILO classification system.

Statistical analyses were performed using SAS® for Windows version 9.1 and STATA®.
Kappa statistics were used to compare the reliability of classifications for image quality, parenchymal abnormalities and pleural abnormalities for each image format. Standard errors were calculated using a bootstrap method based on 2,000 replications. Further analyses investigated classification differences across image formats controlling for potential confounders such as age, smoking, and body mass index. A generalized estimating equations (GEE) approach was employed to incorporate the clustering effect in the analysis.

Among the 107 subjects, 80% were male, mean age was 64.6 years, 64% had smoked at some time in their lives, and 56% reported occupational dust exposure. One FSR and one digital image were lost. A total of 3,816 image readings were analyzed (106 images x 3 formats x 6 readers x 2 rounds). The bulk of small opacity profusion scores for FSR images were “0” (43%) and “1” (30%. There was a substantial representation of both small rounded (34%) and small irregular opacities (66%). Fifteen percent of FSR readings indicated the presence of large opacities, and 41% indicated the presence of pleural abnormalities. Summaries of the classification results for the study images overall and for the three image formats are shown in Table 1 for parenchymal abnormalities, and Table 2 for pleural changes. Table 3 displays the results of the GEE model of agreement by image format, both adjusted and unadjusted for potential confounding and competing variables.

Overall, there were few differences in the reliability of image classifications across image formats. Readings of HC images demonstrated significant greater prevalence of small parenchymal opacities compared to FSR and SC; readings of FSR and SC for small parenchymal opacities did not differ significantly. The prevalence of large opacities differed significantly among all three image formats, with HC>FSR>SC, but the difference between FSR and SC disappeared when images with ‘ax’ were grouped with large opacities. The prevalence of pleural abnormalities differed significantly among all three formats, with FSR>HC>SC. The study results suggest that while the reliability of classifications using HC and SC appears to be equivalent to FSR, there are some significant differences among FSR, HC and SC with respect to the prevalence of some key dust-related abnormalities. It is difficult to formulate a consistent recommendation for use of digital chest images with regard to pleural outcomes, based on these results. In contrast, interpretation of soft copy digital images for small parenchymal opacities and large opacities (with ‘ax’) appears to result in equivalent ILO classifications as traditional film images, and therefore can be recommended for this purpose.

*Images were obtained for each of the three modalities in 107 subjects and were classified on two separate occasions by 6 B Readers. The number of images assessed for film quality is greater than for subsequent outcomes. For a small number readings image quality was rated ‘unreadable’ (n=22). These readings provide no data for subsequent outcomes. df = degrees of freedom

*Images were obtained for each of the three modalities in 107 subjects and were classified on two separate occasions by 6 B Readers. The number of images assessed for film quality is greater than for subsequent outcomes. For a small number readings image quality was rated ‘unreadable’ (n=22). These readings provide no data for subsequent outcomes. df = degrees of freedom