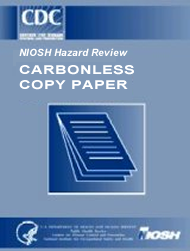 In 1987, the Occupational Safety and Health Administration (OSHA) requested the National Institute for Occupational Safety and Health (NIOSH) to investigate the validity of reported adverse health effects in workers occupationally exposed to chemicals contained in or released from carbonless copy paper (CCP). OSHA also requested that NIOSH publish its findings if health effects were confirmed. The OSHA request was based on one worker’s concern that skin, respiratory problems, and possible brain damage were due to consistent exposure to CCP [52 Fed. Reg.* 22534 (1987)]. In addition, 10 to 12 of the initial complainant’s coworkers who were also exposed to CCP were reported to have suffered adverse health effects.

Thus in 1987, NIOSH issued a Federal Register notice soliciting information about possible adverse health effects from CCP exposure [52 Fed. Reg. 22534 (1987)]. On the basis of information available at that time, no strong conclusion could be reached concerning a consistent link between CCP and major health effects. Between 1987 and 1997, a number of additional incidents were identified as involving health problems potentially related to CCP. Therefore, in 1997 NIOSH issued a second Federal Register notice soliciting new information [62 Fed. Reg. 8023 (1997)].