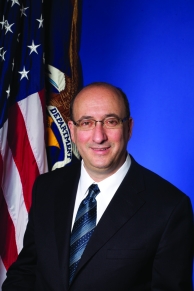 David Michaels, PhD, MPH, is the 12th Assistant Secretary for Occupational Safety and Health in the U.S. Department of Labor, serving as the Administrator of the Occupational Safety and Health Administration (OSHA) since 2009. He has focused on strengthening OSHA enforcement in high risk industries, improving whistleblower protection, increasing compliance assistance for small employers, expanding outreach to vulnerable populations, and developing OSHA’s capabilities in data analysis and program evaluation.

Dr. Michaels is on leave from his position as Professor at the George Washington University School of Public Health, where he had also been Interim Chairman of the Department of Environmental and Occupational Health. He is also Adjunct Professor at the Mount Sinai School of Medicine. He is currently chairman of the National Toxicology Program Executive Committee and a member of the National Science and Technology Council and the Institute of Medicine Roundtable on Environmental Health Sciences, Research, and Medicine.

From 1998 to 2001, Dr. Michaels was the Assistant Secretary for Environment, Safety, and Health in the U.S. Department of Energy. In this position, he was the chief architect of the Energy Employees Occupational Illness Compensation Program, which provided compensation to nuclear weapons workers who developed cancer or lung disease as a result of their work. For this historic work as well as his dedication to scientific integrity, he received the John P. McGovern Science and Society Award from the Scientific Research Society, Sigma Xi.

Prior to that, Dr. Michaels was the Acting Chairperson of the Department of Community Health and Social Medicine at the City University of New York Medical School. His previous academic appointment was Director of the Division of Public Health at the Albert Einstein School of Medicine. Awards he has received include the American Association for the Advancement of Science’s Scientific Freedom and Responsibility Award and the Robert Wood Johnson Health Policy Fellowship Program Lifetime Achievement Award.

The expertise of Dr. Michaels is sought after globally. He has consulted with the Pan American Health Organization’s Center for Human Ecology and Health and the United Nations Centre on Transnational Corporations, as well as provided the Inaugural Cancer and Society Lecture at the International Agency for Research on Cancer in France.

Dr. Michaels graduated from the City College of New York with a BA in history, then earned an MPH in epidemiology and a PhD in sociomedical sciences from Columbia University.