The Arnold S. Monto Award for Exceptional Contribution to the Understanding of Influenza Epidemiology and Prevention was established by CDC’s Influenza Division in 2015. The award is named for Dr. Arnold S. Monto, the Thomas Francis Jr. Collegiate Professor of Public Health at the University of Michigan School of Public Health in Ann Arbor. Dr. Monto is a leader in the field of influenza epidemiology and vaccinology and has mentored many scientists in the Influenza Division, inspiring this award. 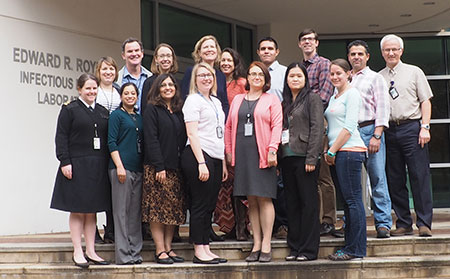 While influenza viruses are constantly changing require year-round surveillance and twice annual assessment of the vaccine composition of influenza vaccines since how well vaccines work depends in part on how similar recommended vaccine viruses are to circulating viruses. Influenza A (H3N2) viruses tend to change most rapidly. During 2014-2015, drifted influenza A (H3N2) viruses which were antigenically different from the recommended vaccine reference virus emerged. These viruses also possessed unique biologic properties that made characterizing them very difficult. Good characterization data is the bedrock of the vaccine strain selection process and a lack of such data could greatly complicate the selection of an effective H3N2 vaccine component.

This situation demanded the use of novel approaches to characterize A (H3N2) viruses during that season. To do this, the Molecular Epidemiology Team developed and validated a new pyrosequencing test to more rapidly and accurately characterize A (H3N2) influenza viruses. The genetic data generated from this new strategy made it possible to better assess the genetic similarity between the vaccine virus and circulating viruses. Importantly the data generated dramatically improved the pool of information available on circulating A (H3N2) viruses for the upcoming vaccine strain selection meeting. According to Dr. David Wentworth, Chief of the Virology, Surveillance, and Diagnosis Branch (VSDB) of CDC’s Influenza Division, “The work of these two teams, which were led by Drs. Gubareva and Fry, enabled rapid and high throughput identification of genetic signatures for the majority of viruses that were antigenically analyzed as part of the bi-annual vaccine strain selection. The ability to infer the virus clade or group for thousands of samples and correlate this with antigenic drift was tremendously helpful in the analysis of viruses circulating in people and strengthened the decision to change the A (H3N2) vaccine virus used for the upcoming season.”

This new test also made it possible to characterize viruses directly from respiratory specimens collected from participants of the U.S. Flu Vaccine Effectiveness Network, a collaborative project between 5 research sites and CDC that calculates and reports interim and final estimates of how well flu vaccines are protecting against medically attended influenza illness. The pyrosequencing data enabled the calculation of vaccine effectiveness for specific genetic groups of A (H3N2) viruses infecting vaccinated study participants. Results indicated that most circulating A (H3N2) viruses had genetic changes and that the vaccine had significantly reduced effectiveness against these viruses. However, vaccine effectiveness was better against a small group of A (H3N2) viruses that did not have these changes and that remained similar to the influenza virus used in the vaccine.

According to Dr. Joe Bresee, Chief of the Epidemiology and Prevention Branch of CDC’s Influenza Division, “This work combined cutting edge epidemiologic and laboratory tools to help us better understand the value of the vaccine, and point us towards ways to make vaccines better in the future. This work is a perfect fit for an award named after Dr. Monto, who is a pioneer in this area, conducting field evaluations of pandemic and seasonal vaccines for decades. Dr. Monto’s work has helped us understand the value of measuring vaccine effectiveness in the communities where vaccines are used and taking that data to help enhance influenza prevention programs.” The MET and IPACT teams’ work exemplifies Dr. Monto’s legacy of innovation in epidemiology and vaccinology.