The Alexander I. Klimov Award for Excellence in Influenza Vaccine and Antiviral Research was established by CDC’s Influenza Division in 2015 in honor of Dr. Alexander (“Sasha”) Klimov, who worked at CDC from 1991 until his death in 2013. Dr. Klimov led work to understand the global etiology of influenza viruses and their comprehensive genetic and antigenic characterization. In his position as Chief of the Virus Surveillance and Diagnosis Branch at CDC, Dr. Klimov and his team pioneered the use of highly sensitive and specific molecular genetic techniques to enable early identification of seasonal and potentially pandemic influenza viruses as well as those that exhibited antiviral resistance. Klimov also was Deputy Director of the World Health Organization (WHO) Collaborating Center on Surveillance, Epidemiology, and Control of Influenza. The work he led on the genetic and antigenic characterization of seasonal, pandemic and novel influenza viruses was crucial for bi-annual WHO recommendations on influenza vaccine compositions for the Southern and Northern Hemispheres which impacted the health and well-being of millions of people worldwide. Dr. Klimov was an internationally renowned scientist and a great friend and colleague. 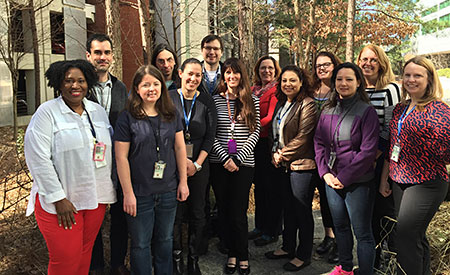 In 2015, the Alexander I. Klimov Award for Excellence in Influenza Vaccine and Antiviral Research was awarded to an interdisciplinary group for their “outstanding efforts in improving vaccine virus characterization and selection following a significant influenza A (H3N2) drifted season.”

The 2014-2015 influenza season was notably challenging due to the rapid emergence and circulation of antigenically distinct influenza A (H3N2) viruses. These drifted viruses also possessed unique biologic properties that presented challenges requiring urgent development of novel approaches for their characterization. The awardees responded promptly to the situation by reinventing the way in which virologic surveillance is conducted for influenza A (H3N2) viruses at CDC.

One of the problems with the influenza A (H3N2) viruses that circulated during the 2014-2015 season was that these viruses would exhibit mutations on their surface proteins when grown in the laboratory using traditional cell lines. These mutations made these viruses nearly impossible to characterize antigenically using the gold standard hemagglutination inhibition assay. To address this problem, the awardees worked together to create a specialized cell line that prevented the mutations from forming. This allowed the CDC Influenza Division to more accurately assess these viruses’ antigenic characteristics, and to determine how circulating influenza A (H3N2) viruses were changing and whether they were like the A (H3N2) component of the seasonal flu vaccine.

In addition, virus neutralization assays were improved to overcome the biological characteristics of these A (H3N2) viruses. Substantial strides were made to improve the robustness and reproducibility of the neutralization assay, which is being performed weekly during the 2015-2016 influenza surveillance season to aid in characterization of influenza A (H3N2) viruses.

According to David Wentworth, Chief of the Virology, Surveillance, and Diagnosis Branch, “The work of these people represents an impressive virological, genomic, and informatics collaboration to combat an ever-changing virus in order to improve vaccine virus selection, carry out the mission of the Influenza Division, and aid the CDC in protecting public health.” Collectively, this effort improved CDC’s contribution to the World Health Organization’s Global Influenza Surveillance and Response System and will continue to provide data critical to choosing new H3N2 vaccine virus at the World Health Organization Influenza Vaccine Consultation Meetings.