2018 Conference on Retroviruses and Opportunistic Infections

March 6, 2018 – A new CDC analysis suggests HIV prevention pill is not reaching most Americans who could benefit – especially people of color.

In the first detailed analysis by race and by risk group, CDC researchers found that only a small percentage of Americans who could potentially benefit from pre-exposure prophylaxis (PrEP), a daily HIV prevention pill, have been prescribed it. Furthermore, while two-thirds of people who could potentially benefit are African American or Latino, they account for the smallest percentage of prescriptions to date. The findings were presented today at the annual Conference on Retroviruses and Opportunistic Infections in Boston by Dawn K. Smith, MD, MPH, MS, epidemiologist and medical officer in CDC’s Division of HIV/AIDS Prevention. Dr. Smith presented the new CDC estimates of PrEP needs and an examination of available data on PrEP prescriptions from a national database of prescriptions filled by commercial pharmacies in the United States.

These high-resolution, public domain images are ready to download and print in your publication. Click on a graphic to see it in high-resolution. These images are in the public domain and are thus free of any copyright restrictions. As a matter of courtesy, we ask that the content provider be credited and notified of any public or private usage of an image. 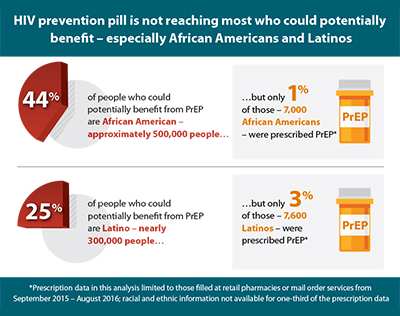 View High Resolution Versionimage icon
In 2015, there were approximately 1.1 million Americans who could potentially benefit from PrEP: 500,000 African Americans, 300,000 Latinos, and 300,000 whites. However, analysis of available data on PrEP prescriptions finds that 7,000 prescriptions were filled at retail pharmacies or mail order services for African-Americans and only 7,600 for Latinos during a similar time period (September 2015- August 2016). While racial and ethnic data were not available for one-third of the prescription data, the analysis shows a substantial prevention need. 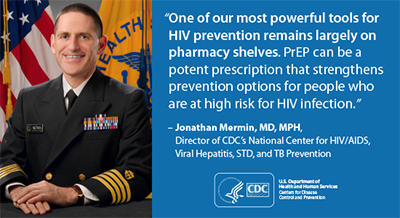 View High Resolution Versionimage icon
“One of our most powerful tools for HIV prevention remains largely on pharmacy shelves. PrEP can be a potent prescription that strengthens prevention options for people who are at high risk for HIV infection.” 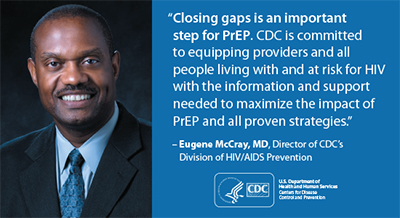 View High Resolution Versionimage icon
“Closing gaps is an important step for PrEP. CDC is committed to equipping providers and all people living with and at risk for HIV with the information and support needed to maximize the impact of PrEP and all proven strategies.”