In advance of World TB Day, on March 24, CDC has released preliminary national surveillance data for 2014 reaffirming that TB control is working, and that we are steadily moving towards the elimination of this deadly disease. Data also suggest that progress is slowing, which is a reminder that TB should not be underestimated.

These data provide an important opportunity to shed light on this significant public health issue that still impacts thousands of people across the nation every year. Please see the media resources below to assist with your coverage.

The following images and graphics highlight major findings from CDC’s analysis of 2014 national surveillance data. These high-resolution, public domain images are ready to download and print in your publication. Click on a graphic to see it in high-resolution.

Please note that this resource is for reporters. If you are a member of the general public and seek additional information about TB, please visit www.cdc.gov/tb/. If you have additional questions, please call 1(800) CDC INFO or email CDC-INFO. 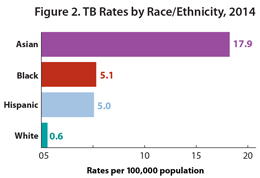 TB Rates by Race/Ethnicity, 2014
View High Resolution VersionCdc-image
Although TB rates declined among all racial/ethnic groups, TB rates among racial/ethnic minorities are much higher than those of whites. Rates for Asians (18.7/100,000), blacks (5.3), and Hispanics (5.0) were 26, seven, and seven times higher than among whites (0.7), respectively. 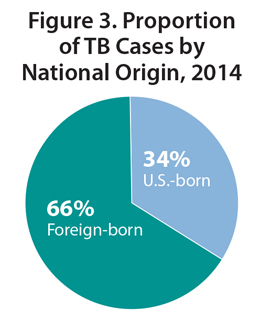 Proportion of TB Cases by National Origin, 2014
View High Resolution VersionCdc-image
Despite declines in the rates of TB among both foreign- and U.S.-born individuals, the TB rate among foreign-born persons was 13 times higher than among U.S.-born persons.