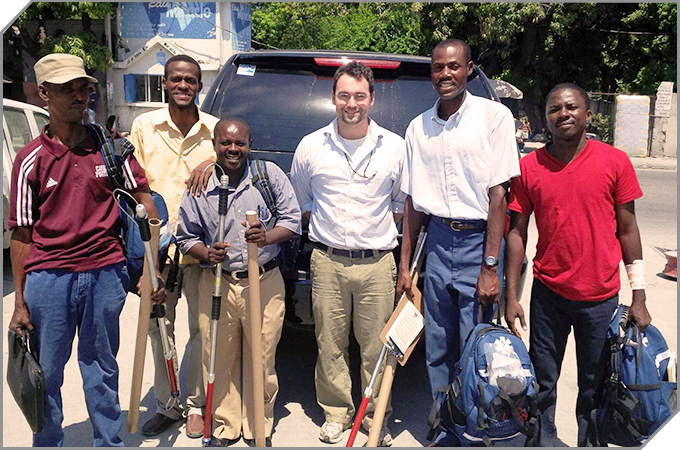 Another way CDC fights rabies is by training local teams who can go out and vaccinate dogs to protect them from rabies. Here, CDC Veterinarian Ryan Wallace (center) poses with a team of vaccinators in Haiti.

September 28 is World Rabies Day, a global day of action and awareness for rabies prevention. Rabies kills about 60,000 people annually, mostly in Africa and Asia. Rabies is nearly always fatal once symptoms appear, so identifying potential exposures and starting post-exposure treatment early is critical to a patient’s survival. One of the ways CDC is working to stop rabies is by collaborating with partners to develop, evaluate, and promote the use of a new rabies test that can more easily and precisely diagnose rabies infection in animals.

The new test, called LN34, is simpler and easier to use than tests that were previously available.  It can be run on the widely used PCR testing platform, whereas the current gold standard for rabies testing in animals — the direct fluorescent antibody, or DFA test — can only be interpreted by laboratory workers with special skills and a specific type of microscope. With the new LN34 test, doctors and patients can make better informed decisions about who needs treatment for rabies, and some people potentially exposed to rabies may be able to avoid the expensive regimen of shots needed to prevent the deadly disease.

After developing the test, CDC worked with staff at 14 laboratories worldwide to assess nearly 3,000 animal brain samples from the Americas, Europe, Africa, and Asia. The samples came from more than 60 mammal species that get rabies, including dogs, raccoons, skunks, foxes, and bats. Through this collaborative evaluation, CDC determined that the LN34 test is reliable and robust and could improve rabies diagnostics and surveillance. The studyExternal was the largest ever to validate the use of this type of test (a real-time RT-PCR) to diagnose rabies in animals.

Earlier this year, the World Organization for Animal Health (OIE) added PCR-based tests like LN34 to its standards Cdc-pdf[35 pages]External for primary rabies diagnosis in animals, meaning these tests can now be used as a stand-alone tool to confirm rabies rather than being used with the DFA test. The World Health Organization is considering adding PCR-based tests to its standards as well. CDC is now working with the Association of Public Health Laboratories to develop rabies testing guidance that could help clinicians and laboratory staff decide which tests to run in different scenarios to confirm rabies infection.

The LN34 has already started to improve rabies diagnostic capabilities in U.S. and international rabies laboratories, and CDC staff have partnered with international groups to conduct training on the use of the LN34 test. For example, CDC recently provided training at the Institute of Epidemiological Diagnosis and Reference in Mexico City at the request of the Pan American Health Organization. Additional rabies laboratories have requested support and more information about use of the LN34 assay.

Currently, testing facilities in many countries most affected by rabies are not able to easily rule out the disease in animals that have bitten someone. In these countries, equipment for DFA testing and rabies vaccine supplies are often held in centralized urban areas, several days’ travel from where someone is bitten – and rabies vaccine can cost several months’ salary. Having a quick, easy-to-run and accurate test like LN34 to tell if an animal that bit someone is rabid could help doctors decide whether someone needs preventive treatment, saving lives as well as families’ livelihoods.