New Ways to Look Inside the Virus

As Zika virus rapidly spread throughout South and Central America in 2015, scientists noticed an increase in cases of microcephaly, the devastating birth defect where a baby’s head is much smaller than expected. They wondered if Zika infection during pregnancy might cause birth defects. Deciphering the relationship between the two wasn’t easy. Zika virus had just emerged for the first time in the Western Hemisphere, and many people infected with Zika virus don’t have symptoms or will only have mild symptoms.

During the first months of the outbreak, NCEZID scientists developed special tests that identified the virus in brain tissues from infants who died from microcephaly and in placentas from women who had miscarriages. This discovery cemented the connection between birth defects and Zika virus infectionExternal during pregnancy. They also found that the virus could make copies of itself in the fetuses’ brains and in women’s placentas and persist in these tissues for months. This may help explain how the virus can cause so much damage.

NCEZID scientists used a technique known as laser microdissection to pinpoint the specific cells where Zika virus might be persisting and replicating. This involves looking under the microscope and guiding a laser to cut away specific cells from areas of the brain and placental tissues, so scientists could measure the amount of Zika virus genetic materials (RNA) in specific cells. This testing method sheds light on where the virus may replicate and how it moves across the placenta from the mother to the fetus and infects the fetuses’ brains. 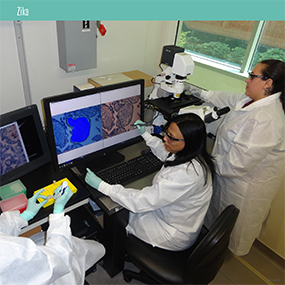 NCEZID scientists developed tests and techniques to show Zika virus causes birth defects and pregnancy losses when a woman is infected during pregnancy.