The eradication of smallpox from the world in 1977 was one of public health’s greatest achievements. Smallpox remains the only human disease that has been defeated. This important achievement would not have been possible without the availability of a safe and effective vaccine. However, recent scientific advances have made it theoretically possible that the virus that causes smallpox could be recreated in a lab and used for a bioterror attack. It’s important that we have tools ready, including tests to rapidly identify cases of smallpox, effective treatments, and vaccines to protect people should the disease reemerge.

Meanwhile, a related virus—monkeypox—continues to cause outbreaks in Africa. In 2003, monkeypox was responsible for nearly 50 illnesses in the United States after imported African rodents spread the disease to pet prairie dogs.

NCEZID scientists developed two new tests for variola virus, the virus that causes smallpox, and in 2017 the tests were approved by the US Food and Drug Administration for use in the United States. The tests provide more reliable results in as little as 5 hours. The tests have now been sent to labs in CDC’s Laboratory Response Network—the labs that would be the first to receive samples if an outbreak were to begin. Although the risk of a bioterror event involving smallpox is believed to be low, the improved test could sound an early alarm in the event of a biological attack.

NCEZID scientists also developed a test that helps tell the difference between antibodies created by a smallpox vaccination and antibodies that are the result of a new infection with smallpox or a related virus, such as monkeypox. The microarray test includes specific proteins for variola virus and monkeypox virus. In 2017, NCEZID laboratorians used the microarray to confirm monkeypox cases in Africa. In the future, we hope to refine the test so it could be used in rural or resource-limited settings, including some areas of Africa where monkeypox outbreaks are common. 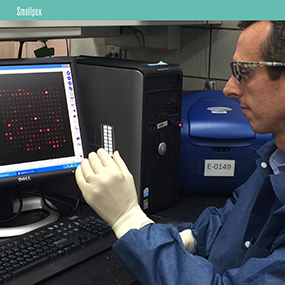 NCEZID experts received FDA clearance for two tests to quickly and reliably detect smallpox. They also developed a way to differentiate between antibodies created by smallpox vaccination and antibodies stimulated by infection.