New Test for a Rare Virus in Pet Rats

When a couple of pet rat breeders got sick in late 2016 and early 2017, NCEZID determined that they were infected with Seoul virus, a type of hantavirus found in Norway rats. Seoul virus can sicken people who have contact with infected rats, their urine and droppings, or contaminated surfaces. Over 5 months, 17 people in 7 states were infected with Seoul virus and 3 were hospitalized. Seoul virus had previously been found in pockets of wild rats in the United States, but this was the first outbreak in pet rats in this country.

Complicating the problem: rats infected with Seoul virus show no symptoms, so it was hard for breeders and owners to know if their rats were infected with the virus—and whether people or other rats in the household might be at risk for infection. Existing testing was cumbersome and couldn’t quickly tell if the sick rat had Seoul virus or another hantavirus.

NCEZID experts developed a new test for rats that enabled CDC laboratories to test for the outbreak strain of Seoul virus more quickly, in fewer steps than older tests. The test also differentiates between Seoul virus and other types of hantavirus that can infect people. Since January 2017, NCEZID laboratorians have used the test on more than 2,000 blood and tissue specimens from domesticated rats in more than 100 rat-breeding facilities in 16 states.

NCEZID also wanted to make testing easier and cheaper for rat breeders and owners. We validated two commercially available tests for Seoul virus, and hope that better access to testing will encourage rat breeders and owners to test their rats. This testing will be key in preventing the spread of Seoul virus among pet rats—and in decreasing the risk of infection in people. 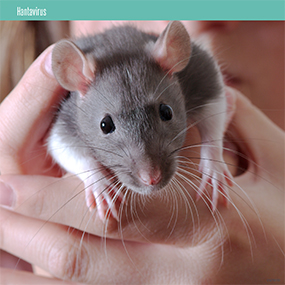 NCEZID created a test for a virus found in pet rats that sickened 17 people in the United States.