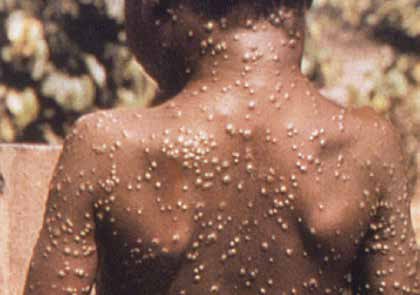 One of the symptoms of monkeypox is a rash similar to the rash caused by the smallpox virus.

Monkeypox is a rare viral disease, especially in the US, but outbreaks in Africa have killed up to 10% of infected people. Monkeypox is similar to smallpox but has milder symptoms. When a traveler infected with monkeypox flew into the US from Nigeria in July 2021, NCEZID sprang into action to keep the disease from spreading.

The response depended on swift coordination of public health authorities from 25 states and more than 70 NCEZID staff. The team monitored for signs of illness in more than 200 people who came into contact with the traveler. This included his family members, other airline passengers, his healthcare team, and lab scientists who processed his samples. Everyone completed monitoring without becoming ill. NCEZID staff also performed lab testing, developed monitoring guidance, and oversaw the first-ever use of TPOXX, a smallpox treatment stockpiled by the Strategic National Stockpile.

CDC’s quick and coordinated action with state and local partners prevented a potential outbreak of monkeypox, a dangerous virus that can kill people it infects. 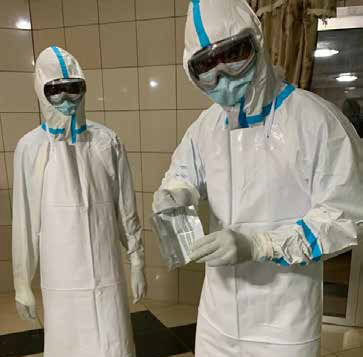 In 2021, CDC helped contain and end Ebola outbreaks in DRC and Guinea.

After helping to bring the world’s second-largest outbreak of Ebola to an end in 2020, CDC successfully supported simultaneous efforts to contain and end two Ebola outbreaks in 2021.

In a joint effort, NCEZID and CDC’s Center for Global Health responded to an outbreak in North Kivu Province, Democratic Republic of the Congo, where 12 cases and 6 deaths were reported. The Centers also supported a response in Guinea’s N’Zérékoré Prefecture, where the outbreak recorded 23 cases and 12 deaths.

These responses were smaller than the activations to combat COVID-19 and the 2018 eastern DRC Ebola outbreak and, notably, they were conducted while the COVID-19 pandemic dominated the world’s attention and resources. However, despite challenges, both outbreaks were ended within months.

Smaller-scale mobilization to combat Ebola outbreaks proved effective in 2021 and prevented the spread of this deadly disease to neighboring countries.