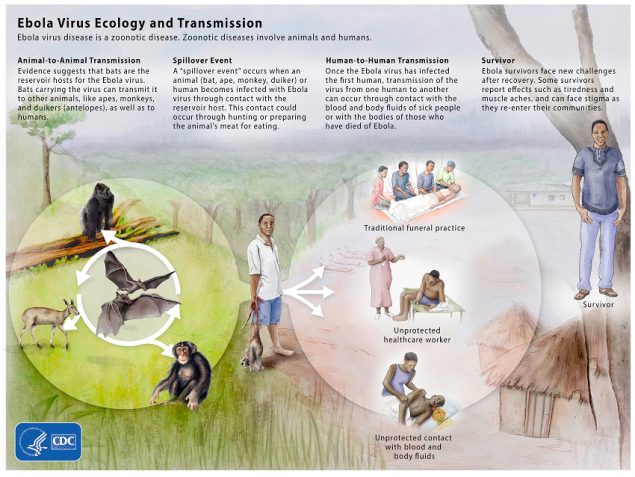 This graphic shows the life cycle of the Ebola virus.

The 2014 Ebola epidemic was the largest in history, with widespread transmission in multiple West African countries. The first case was reported in Guinea in March 2014, and the disease quickly spread into the neighboring countries of Liberia and Sierra Leone. Over the span of a year, the Ebola epidemic caused more than 10 times as many cases of Ebola than the combined total of all previous Ebola outbreaks. As the outbreak spread, travel-associated cases appeared in Nigeria, Mali, Senegal, and places outside Africa, including Europe and the United States. If the virus reservoir is determined, CDC and other international health partners will be able to issue stronger guidance to local groups about the origins of Ebola virus transmission, making such a widespread outbreak less likely to occur in the future.

While the outbreak was declared over by the World Health Organization (WHO) on May 9, 2015, subsequent clusters of disease occurred in June 2015, November 2015, and April 2016.  WHO again declared Liberia Ebola-free in June 2016, but there remained a fear that new cases could emerge.  Researchers believe that Ebola virus is animal-borne (zoonotic) pathogen, and that bats are the most likely natural reservoir. However, the exact reservoir species that harbors the virus has yet to be determined. CDC’s Viral Special Pathogens Branch within the Division of High-Consequence Pathogens and Pathology is conducting studies to determine the virus host in order to develop better risk reduction measures to help prevent future outbreaks. 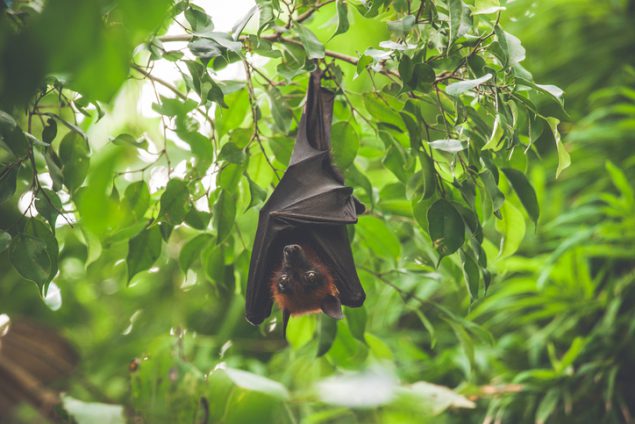 CDC has partnered with Njala UniversityExternal in Sierra Leone to enhance surveillance for Ebola in wildlife. The main focus is to screen various types of bats, particularly fruit bats, in the area for any signs of Ebola virus. Bats are the current subject of study as Ebola virus is a close cousin of Marburg virus, which causes a similar disease in humans and is consistently found in a specific species of African fruit bat. In total, CDC-trained, local healthcare workers have captured almost 400 fruit bats for testing at Njala University for evidence of  Ebola virus infection.

A disease threat anywhere is a disease threat everywhere, and the Ebola epidemic has shown how easily infectious diseases can cross borders—land, rivers, and even oceans. From the start of the epidemic, porous country borders among West African countries combined with a highly mobile population aided the rapid spread of Ebola virus from its outbreak origin in Guinea. In West Africa, border control measures are mostly nonexistent—getting to another country is often as simple as taking a boat across a river. This makes it easy for a disease like Ebola to spread across countries. Determining the virus reservoir will not only help answer questions about how the virus emerges, but also help local and international public health workers to be more prepared and aware of future epidemic risks.

To view a printable version of this page: Ebola Reservoir Study Cdc-pdf[PDF – 1 page]