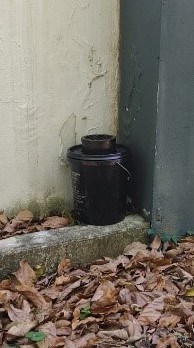 Female Aedes aegypti mosquitoes spread dengue, Zika, and chikungunya, and other viruses to people through bites. Dengue infects up to an estimated 400 million people each year.

Traditional mosquito control is expensive and relies heavily on the use of insecticides. In many areas, mosquitoes have become wholly or partially resistant to commonly used insecticides. Since 2011, researchers at the Centers for Disease Control and Prevention (CDC) in San Juan, Puerto Rico invented, field-tested, and have improved the Autocidal Gravid Ovitrap (AGO). AGO do not use any insecticide or chemicals.

The AGO captures female Ae. aegypti mosquitoes. The trap is made from a 5-gallon black bucket. Water and a small packet of hay is added to the bucket. Decomposing hay and water attract female mosquitoes looking for a place to lay eggs. A capture chamber with a screen prevents mosquitoes from laying eggs in the trap. Sticky paper on the walls of the chamber captures the mosquitoes. Several traps are placed around homes or buildings to monitor or control mosquitoes.

The simple and effective design is easy to manufacture and to maintain. The hay packet and water are changed every two months. Traps have been used successfully in many small- and large-scale projects, reducing the number of mosquitoes and, potentially, the numbers of people getting sick in an area.

In 2016, CDC and AP&G Company worked together to further validate and test traps in the field. Once a patent license agreement was in place, AP&G Company began selling the AGO to pest control professionals and consumers.

The Federal Laboratory Consortium for Technology Transfer (FLC) recognized the work with the 2021 Excellence in Technology Transfer Award. This award recognizes employees of FLC member laboratories and non-laboratory staff who have accomplished outstanding work in the process of transferring federally developed technology.