Congress established the Arctic Health Research Center (AHRC) in Anchorage as part of the U.S. Public Heath Service. Collaborative studies between the AHRC and Alaska Native Medical Center were conducted on biology and health in the Arctic, including the early treatment and prevention of tuberculosis. The AHRC also conducted studies in virology, parasitology, environmental health, entomology, and epidemiology.

The Arctic Health Research Center laboratory moved to Fairbanks. The epidemiology unit stayed in Anchorage to retain the close association with the staff of the Alaska Native Medical Center. Collaborative studies were conducted on a variety of infectious and non-infectious diseases of significance in the Alaska Native people such as mumps, pneumonia, cardiovascular diseases, hereditary diseases, cystic echinococcosis, and anemia.

The Arctic Health Research Center closed. The epidemiology activities in Anchorage were adopted by CDC, which established a laboratory on the Alaska Native Medical Center grounds. The unit became known as the Alaska Investigations Program. Collaborative studies continued in the areas of infant mortality and infectious diseases of children, such as streptococcal disease and rheumatic fever. A prevention program for streptococcal disease was established. Studies continued on the causes of meningitis and anemia, effects of otitis media, hepatitis, genetic and metabolic disorders, epidemiology of cancer, and foodborne botulism.

Vaccine evaluations for prevention of infections caused by Haemophilus influenzae type b and hepatitis B virus were begun. The natural history of hepatitis B was described. The association between hepatitis B and liver cancer and between the Epstein-Barr virus and nasopharyngeal cancer were described. An early screening program for the detection and treatment of alveolar hydatid diseases was begun, and efforts to determine the factors causing iron deficiency anemia in rural Alaska were resumed. Botulism surveillance and outbreak responses for Alaska were an AIP responsibility.

Collaborations between AIP, Indian Health Service, and the State of Alaska resulted in statewide vaccine programs for the prevention of hepatitis B and Haemophilus influenzae type b infections. These programs resulted in a dramatic statewide reduction in diseases caused by these infections. Vaccine evaluations for the prevention of pneumococcal disease were initiated. Studies on the association between human papillomavirus and cervical cancer were conducted. 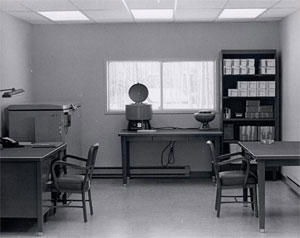 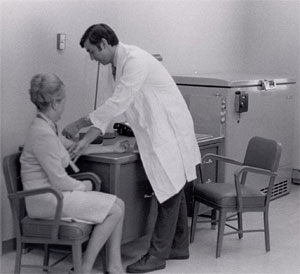 Examination in the old AIP building. 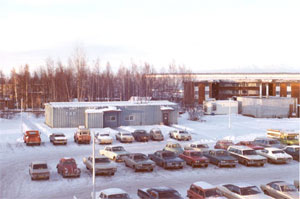 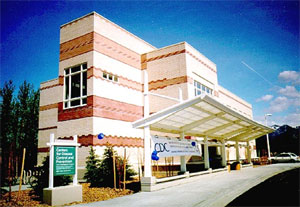 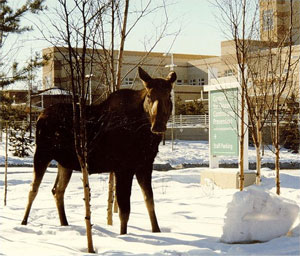