People who live in the Arctic and sub-Arctic regions face challenges not usually faced by residents of warmer, more southern environments (1). The cold northern climate keeps people indoors, amplifying the effects of household crowding, smoking and inadequate ventilation on the person-to-person spread of infectious diseases. Residents, governments, and public health authorities of all Arctic countries are increasingly concerned about the spread of zoonotic infections as the climate warms, the emergence of antibiotic resistance among bacterial pathogens, the reemergence of tuberculosis, the entrance of HIV into Arctic communities, the specter of pandemic influenza, and the emergence of new viral pathogens.

In an effort to address these concerns, the International Circumpolar Surveillance (ICS) system was established. ICS is a network of hospitals, public health agencies, and reference laboratories throughout the Arctic linked together to collect, compare, and share uniform laboratory and epidemiological data on infectious diseases of concern and to help develop prevention and control strategies (2). In addition, infectious disease experts have formed work groups to collaborate on research and sentinel surveillance systems are monitoring bacterial and viral pathogens in circumpolar regions.

ICS was established in 1999; its first priority was to share data on invasive bacterial diseases caused by Streptococcus pneumoniae, Haemophilus influenzae, Neisseria meningitidis, and groups A and B Streptococcus because: 1) these are diseases of public health importance in Arctic countries, 2) strains of Streptococcus pneumoniae were rapidly acquiring resistance to antibiotics commonly used to treat these infections, 3) most clinical laboratories in Arctic countries routinely culture these pathogens from clinical specimens, and 4) vaccines are available to prevent disease caused by clinically important serotypes of Streptococcus pneumoniae, Haemophilus influenzae, and Neisseria meningitidis. While no vaccine is currently available for diseases caused by groups A and B Streptococcus, surveillance is important because it allows public health officials to detect outbreaks of group A Streptococcus and to assess the effectiveness of control measures, such as prenatal screening and intrapartum antibiotics for group B Streptococcus.

ICS has expanded substantially to include multiple countries, additional pathogens, and new programs:

Governance and Structure of ICS

The priorities and overall direction of ICS are governed by a Steering Committee (see Figure) consisting of two representatives from each participating country, representation from WHO European regional office (Copenhagen), the Indigenous Peoples Secretariat, and Russian Association of Indigenous Peoples of the North.  The Steering Committee may identify other infectious diseases of concern and therefore suitable for circumpolar surveillance including sexually transmitted infections, Hepatitis B, HIV/AIDS, and acute respiratory virus diseases such as RSV infections in infants.

Surveillance of invasive bacterial diseases is coordinated by a subcommittee, the Invasive Bacterial Diseases Working Group, chaired by AIP.  In 2006, ICS representatives from Canada, Greenland and Alaska met to establish a TB surveillance subgroup of the ICS network to collaboratively address common issues.  To date, the ICS-TB Working Group includes jurisdictional representatives from northern Canada, Finland, Greenland, Norway, Sweden, Russian Federation, and the USA (Alaska). The purpose of the working group is to increase knowledge of TB epidemiology related issues in the circumpolar region and to support epidemiologic projects which will provide evidence to inform policy decisions, program design and evaluation in circumpolar jurisdictions.  Administration of the working group resides in the Public Health Agency of Canada.

In addition to surveillance activities, circumpolar research working groups can also be formed. To date, a viral hepatitis working group and a Helicobacter pylori working group were formed to promote collaborative research in the Arctic. It is anticipated that as surveillance is implemented for other ICS priority diseases, and research interests develop for other infectious diseases of concern, similar coordinating working groups lead by other partner countries will be established. 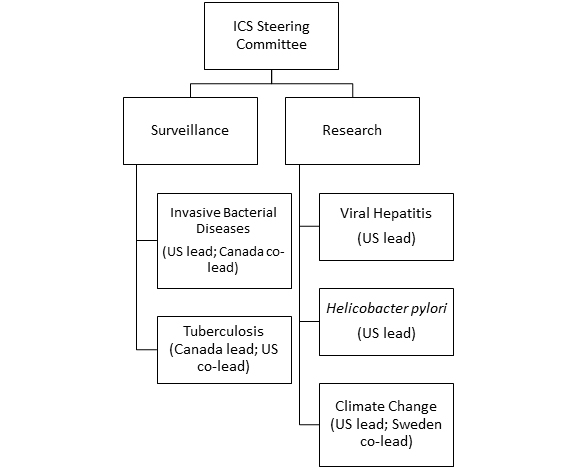