“A 30-year-old female presents to the emergency room directly from the airport accompanied by a friend. The patient was weak and complained of a three day history of high fever (not measured), headache, chills, and severe abdominal pain while in Guinea. One day after admittance the patient developed an enanthem [red spots inside her mouth] and complained of a sore throat. The following morning the patient developed a generalized maculopapular [flat red] rash.”

The above is the first part of a scenario given (verbatim) as part of the proficiency testing for smallpox to laboratory scientists in the Laboratory Response Network (LRN). The LRN is an integrated network of over 125 local, state, and federal labs that can respond to biological and chemical terrorism, and other public health emergencies. Smallpox, considered a potential threat for use in bioterrorism, is unique as the world’s only eradicated human infectious disease.

When a doctor sees a patient suspected of having a serious infectious disease, they contact their state or local epidemiologist, a health scientist who tracks diseases and outbreaks. The epidemiologist makes the decision of whether to contact the local LRN lab for testing.  An entire generation of health professionals and laboratory scientists have never clinically seen or diagnosed smallpox.  Newly recognized monkeypox, vaccinia, and cowpox infections, as well as distinguishing smallpox from certain other rash illnesses, such as chickenpox, may pose diagnostic challenges. To help address this issue, CDC’s smallpox experts developed two complementary algorithms, which are sets of conditions to guide decision-making based on symptoms and level of risk for smallpox. One algorithm is used by epidemiologists, and one by LRN lab scientists.

In the spring of 2014, CDC’s smallpox team held a training for all LRN lab scientists and epidemiologists to give them the opportunity to practice using the algorithm in mock scenarios. In November, CDC conducted smallpox proficiency tests for LRN laboratories using simulated scenarios. Adding to this interactive, real-life approach, CDC staff took phone calls from LRN teams, answering their questions by posing as the physicians involved with the patients in the mock scenarios.

The use of hypothetical smallpox scenarios, algorithms with a clinical component, and engagement with CDC experts during the training and proficiency testing strengthened the relationship between CDC, LRN labs, and epidemiologists, which should prove beneficial during an emergency response. Labs demonstrated their improved preparedness for a smallpox emergency. There was a 98% pass rate on the proficiency tests this year, up 12% from the previous test in 2012.

Can you name which disease is associated with each rash in the picture below? 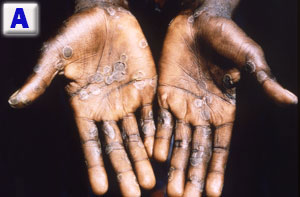 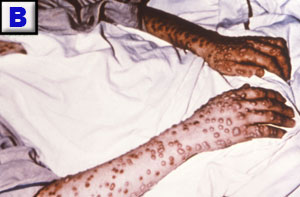 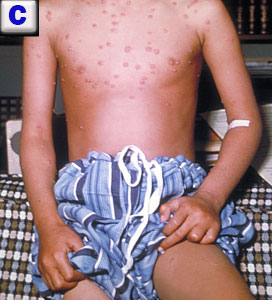 “It was a very positive experience. All labs try to set up regular meetings with our epidemiologists but so often we all get so bogged down in our own work, a long time can go by without working together. You don’t want an actual event like this to be the first time you have that dialogue.”