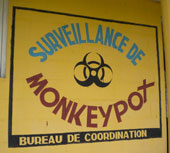 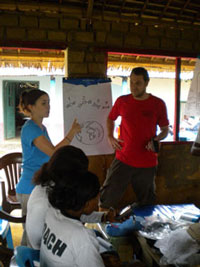 The feverish boy rode his rusty bicycle 40 kilometers down the rutted dirt roads to take his exams—only to be turned away at the schoolhouse door because of his widespread rash. Stories like this are common in the Democratic Republic of Congo (DRC) where monkeypox, a relative of the now-eradicated smallpox virus, is endemic. Monkeypox is carried through animals in these forested regions.

Since 2010, Poxvirus and Rabies Branch’s poxvirus experts have made more than 20 trips to the Tshuapa District in DRC. Teams have trained more than 200 healthcare workers on infection control practices, disease recognition, and the collection of diagnostic samples. In collaboration with the International Conservation and Education Fund, the teams also have developed and shown educational films for the local public. In addition, they have helped establish routine laboratory-based surveillance for monkeypox in the district, and this has strengthened the reliability of data reported on monkeypox.

In addition to strengthening monkeypox surveillance in DRC, researchers with the Poxvirus and Rabies Branch are conducting studies to learn more about the transmission of monkeypox and to evaluate rapid point-of-care diagnostics. They also are studying if vaccinating healthcare workers offers protection against monkeypox. In a study of the ecology of monkeypox, branch researchers are testing more than 600 animals to determine if they are infected with the monkeypox virus.

The combination of CDC expertise and the dedication of local partners in DRC has led to the early detection of monkeypox outbreaks in the Tshuapa District, allowing for a rapid public health response.