Thinking Outside the Cowpox: The Discovery of a Pox-Related Virus

After a 2012 visit from the CDC Poxvirus Team, health officials in the country of Georgia knew to look out for cowpox among residents of the region, which sits on the Black Sea and is bordered by Turkey, Armenia, Azerbaijan, and Russia. But eight months later, when two cattle herders showed up with fever and pox-like skin lesions, Georgian health officials and the CDC Poxvirus Team discovered something they were not looking for — a previously unknown orthopoxvirus, Akhmeta virus.

The CDC Poxvirus Team had just visited scientists at Georgia’s Ministry of Health and Ministry of Agriculture to raise their awareness about the signs, symptoms, and prevention of cowpox, a species of Orthopoxvirus, the genus which also includes monkeypox and smallpox. This was late in 2012. Just eight months later, in July 2013, two Georgian herdsmen from the Akhmeta region sought medical care for fever and skin lesions. Neither had been vaccinated for smallpox, and they tested negative for anthrax infection, an infection among rural herders in Georgia. Recalling what they had learned from the CDC Poxvirus Team, the Georgian National Center for Disease Control and Public Health (NCDC) suspected cowpox and sent swabs from the herdsmen’s’ lesions to the CDC laboratory for testing. The samples did contain Orthopoxvirus, but they did not genetically match any known pox virus. 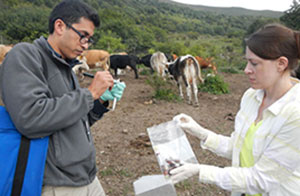 Neil Vora and Ginny Emerson collect blood samples from cattle in the country of Georgia for orthopox testing.

Read the original article in the New England Journal of Medicine: Human Infection with a Zoonotic Orthopoxvirus in the Country of Georgiaexternal icon

“You can’t find what you are not looking for. In other words, they knew to be looking out for pox infections rather than just stopping at the negative anthrax results and never diagnosing the patients.”

CDC laboratorians sequenced the virus genome and identified a new species of pox viruses. They realized the significance of their discovery. Until that point, the only types of orthopoxviruses known to cause significant illness in humans were smallpox (variola), vaccinia, monkeypox, and cowpox. While the best known of these, smallpox, primarily infected humans, other orthopox infections occur mostly in animals. The smallpox vaccine, routinely administered in most of the world until smallpox was declared to be eradicated in 1980, may have protected humans from other related orthopoxviruses. When routine smallpox vaccinations stopped, that opened the door for these other viruses to emerge or re-emerge in humans. The discovery of Akhmeta virus supports the theory and suspicions that orthopoxviruses may be more abundant in Georgia than previously recognized.

Taking a One Health approach, which recognizes that the health of humans, animals, and the environment are connected, health officials from CDC, the Georgia’s Ministry of Health and Ministry of Agriculture, and NCDC tested serum samples from people who were in contact with the sickened herdsmen, the cattle in their herd, and rodents trapped in the surrounding area. The findings indicated that 10 of 11 cattle in the herd, as well as many of the people and small mammals tested, had previously been infected with orthopoxviruses. The team also went back and retested samples that had been submitted and tested negative for anthrax infection since 2009. Interestingly they found a sample from 2010 that was genetically similar, though not identical, to Akhmeta virus. The sample came from someone who had had regular contact with cattle, had not been vaccinated for smallpox, and had been in a different area of Georgia than the original herdsmen found to have Akhmeta virus.

“We know there is cowpox in Western Europe and vaccinia in Western Asia. It makes sense to look in Georgia.”

Going forward with this collaborative effort, the CDC Poxvirus Team is conducting a three-year animal surveillance study to better understand how this new virus spreads. In addition, NCDC labs will now test all anthrax-negative isolates for orthopoxviruses and other common causes of illnesses with symptoms of fever and skin lesions, including parapox viruses and rickettsial bacteria. Their goal is to strengthen Georgia’s capacity to identify the causes of these infections and to monitor them with a national surveillance system for these pathogens.
Page last reviewed: March 26, 2015
Content source: Centers for Disease Control and Prevention, National Center for Emerging and Zoonotic Infectious Diseases (NCEZID), Division of High-Consequence Pathogens and Pathology (DHCPP)
Related Resources