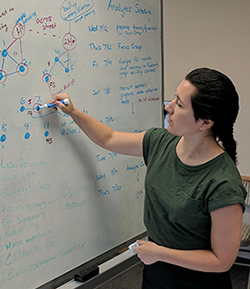 “The discussions were key to solving the outbreak,” said Sarah Luna, PhD (pictured above), a CDC EIS Officer who investigated the illnesses. “Many parents reported that their children had played in areas with farm animals and had been exposed to manure.”

In July 2017, an outbreak of Escherichia coli O157 (E. coli O157) infections sickened young children in a small community on the border of Utah and Arizona. E. coli O157 infections, which are caused by eating, drinking, or touching something contaminated with the bacteria, often cause bloody diarrhea and can also cause a life-threatening complication involving kidney failure, called hemolytic uremic syndrome (HUS). Local health officials asked a team of CDC epidemiologists to come to the community to help them investigate the outbreak. Two young children sickened in the outbreak had died from HUS, and the outbreak was continuing. Health officials needed to figure out what was causing the outbreak and how to stop it, to prevent more illnesses.

In response to the Utah request, CDC dispatched specialists from its Epidemic Intelligence Service (EIS) as part of an “epi-aid” investigation. CDC and local investigators started by reviewing information about what people ate and did in the week before they got sick. At first, the investigators wondered whether contaminated ground beef was the source of this outbreak. Many parents said their children ate ground beef bought at a local grocery store before getting sick. Previous U.S. outbreaks of E. coli O157 infections were linked to ground beef. Investigators tested leftover ground beef from sick people’s homes and from the local grocery store, but did not find evidence of E. coli O157 contamination. The search for the outbreak source continued, including checking into fresh produce, community water sources, animal contact, and contact with other sick children.

Nothing seemed connected, so health officials tried another approach. They organized small group discussions with parents of sick children, to see if the conversations might bring up something that the children shared, that could be the outbreak source. Parents discussed their families’ day-to-day life and their children’s diet and activities the week before they got sick. Investigators asked parents questions like:

Using information from the groups, investigators constructed a community map of the children’s activities that highlighted how the infections likely spread from one person to another. These community discussions were also a great opportunity to answer questions about how a person can get an E. coli infection and how to prevent its spread, such as washing hands after contact with animals, before and after preparing food, and after caring for someone who has an E. coli infection. 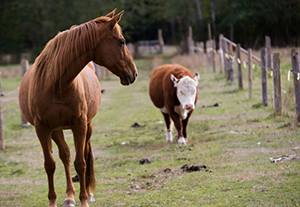 Around the same time, the same strain of E. coli O157 making people sick was found in the manure of three farm animals – two horses and a cow – that lived within a few blocks of the children who got sick first. Many healthy farm animals carry E. coli bacteria in their gut and can shed it in their feces, contaminating the areas where they live and roam.

By the end of the outbreak, 12 people had been infected with E. coli O157. Sick people ranged in age from 1 year to 28. Eight people were hospitalized, including four people who developed kidney failure. Sadly, two children died. The investigation ultimately revealed that contact with animals was the likely source of this outbreak. By working directly with the affected community members, investigators learned important clues that helped solve this outbreak and provided opportunities to educate the community about ways to prevent E. coli infections in the future.