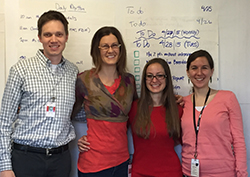 Botulism paralyzes or kills quickly. Just one case is a public health emergency, because it can signal an outbreak. That’s why CDC’s botulism clinical consultation service is on call 24/7.

When the Ohio Department of Health reported a suspected botulism case on April 21, 2015, CDC and its partners responded quickly. That rapid response helped save lives in what turned into the largest botulism outbreak in the United States since 1978. All of the sick people had attended a church potluck before their illnesses began.

Botulism is a rare but serious paralytic illness caused by a nerve toxin that is produced by the germ Clostridium botulinum. The toxin causes muscle paralysis, which in some cases includes the muscles used for breathing. Botulism can be treated with an antitoxin which blocks the action of the toxin circulating in the blood. Patients with respiratory failure and paralysis may need to spend weeks or months on a breathing machine (ventilator) while the paralysis slowly goes away.

CDC arranged for vials of botulinum antitoxin to be released from the Strategic National Stockpile and delivered to Ohio. Four CDC staff members assisted the Ohio Department of Health and the Fairfield Department of Health with the investigation in Ohio. Other CDC staff provided around-the-clock clinical guidance to hospitals treating the patients with botulism. CDC, state and local health departments, and hospitals worked to coordinate patient care and find the source of the outbreak to prevent more people from getting sick.

Twenty-nine people got sick in this outbreak, 25 were hospitalized, and one died. The rapid response and administration of antitoxin helped reduce some of the most severe health effects. A week after the outbreak was reported to CDC, 60 percent of the sick people had been discharged from the hospital.

CDC worked with the Ohio Department of Health and the Fairfield Department of Health to interview people who had attended the potluck. Investigators gathered samples of food eaten at the potluck – even pulling discarded food from trash containers at the church in their search for the outbreak’s source – and CDC’s botulism laboratory tested patient specimens and foods.

The investigation identified potato salad made with home-canned potatoes as the source of the outbreak. The potatoes had not been processed using the correct home canning technique requiring a pressure canner. Outbreak investigations like this one provide information which can be shared with the public to help make food preparation safer and prevent future outbreaks.