“Fungal diseases [like histoplasmosis] have taken a back seat to bacterial and viral infections, to the point where many doctors don’t think about fungi as a cause of illness. But statewide tracking of fungal diseases and outbreak findings show that we should be concerned about fungal diseases.” — Jose Serrano, MPH, epidemiologist at the Louisiana Department of Health and lead investigator of the histoplasmosis outbreak

In November 2018, what seemed like a normal camping trip led to a fungal disease outbreak. A group of campers in Louisiana got sick with what turned out to be histoplasmosis, an infection caused by the environmental fungus Histoplasma.

The Louisiana Department of Health got a call about two patients—a teenage girl who was thought to have viral pneumonia and a middle-aged man with an unknown respiratory illness. Their symptoms weren’t going away after they were hospitalized and treated with medicines commonly given for pneumonia. After their doctors consulted an infectious disease specialist, the two patients were tested and treated for histoplasmosis.

Both patients had visited a campsite in rural southern Louisiana three weeks before getting sick. The Louisiana Department of Health contacted campsite officials to get a list of other campers who might have gotten sick. Health officials soon began an investigation, with support from CDC’s Mycotic Diseases Branch, to find out if others were infected and how these campers became sick.

The Louisiana Department of Health’s interviews revealed that about half of the people on this camping trip got sick. The health department asked CDC to test the campers’ urine, and the lab results confirmed the campers had histoplasmosis.

The fungus that causes histoplasmosis lives in the environment, particularly in soil that contains large amounts of bird or bat poop. But none of the sick people remembered any bird or bat poop at the campsite. The investigation team searched the entire campsite for clues about how these campers were exposed to this fungus.

The health department learned that the campers participated in many activities, including hiking, collecting firewood, digging soil, and geocaching. Geocaching is like a digital scavenger hunt. Players locate objects and sites using an app on a smartphone GPS device. Campers had used the campsite for this game, which became an important clue for public health officials. When they toured the geocaching sites, they found that one of the objects had been hidden in the soil at the bottom of a hollow tree. When the team looked inside with a flashlight, little eyes stared back at them. Bats!

CDC’s Mycotic Diseases Branch laboratory tested soil samples from areas surrounding the geocaching sites. A sample from the bottom of the hollowed-out tree tested positive for the fungus that causes histoplasmosis.

After finding the fungus, the Louisiana Department of Health worked to identify any potential high-risk areas to prevent others from becoming exposed. Officials told campers to avoid activities that disturb soil.

Additionally, health department staff provided a document camp officials can share with all future visitors. It tells campers how to reduce their risk of being exposed to the fungus.

“Fungal disease outbreaks are relatively rare—this investigation confirmed that people can get histoplasmosis in Louisiana, and that disruption of soil is still a significant health risk for both sick and healthy individuals,” said Serrano. 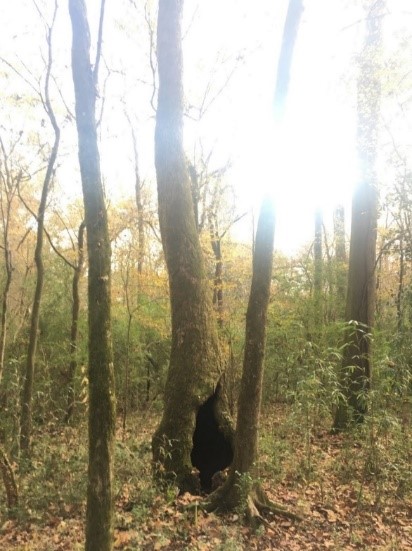 A hollowed-out tree like this one was the source of Histoplasma at the Louisiana campsite.

Learn more about how to prevent histoplasmosis.