When an Oklahoma hospital identified a patient with the multidrug-resistant fungus Candida auris in April 2017, the Centers for Disease Control and Prevention and the state Health Department worked with hospital staff to rapidly identify other cases and stop its spread. Through successful infection control and robust coordination, C. auris did not spread beyond the initial patient.

C. auris is a serious threat because it can spread from person to person in healthcare settings, live on surfaces for several weeks and cause outbreaks in health care facilities. One in three patients with an invasive C. auris infection dies and the fungus is often resistant to drugs used to treat it.

To ensure C. auris did not spread to other patients in the Oklahoma hospital, the state Health Department requested CDC’s expertise and assistance. The response team immediately implemented components of CDC’s containment strategy, including reviewing infection control measures and developing a plan to test patients and rooms to see if transmission had already occurred. 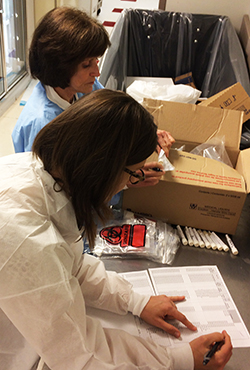 Over the course of two days, the team took 73 samples from surfaces, such as tray tables and door handles, in the patient’s room and from other patients in the facility in their search for C. auris. They also tested other rooms where the patient stayed. C. auris can be difficult to identify with standard laboratory methods, so the samples were sent to CDC. Microbiologists tested these samples for C. auris and conducted whole genome sequencing that can identify the strain and determine if the Oklahoma case was related to other U.S. C. auris cases.

“We were able to accomplish so much in 48 hours because the hospital was committed to responding quickly to C. auris,” said epidemiologist Karlyn Beer, Ph.D., of CDC’s Mycotic Diseases Branch. “They invested long hours and personal time to prevent more cases.”

Others who participated in the response were Kim Skrobarcek, MD, from the Division of Health Quality Promotion (DHQP) and Tom Chiller, MD, chief of the Mycotic Diseases Branch.

“We taught the hospital staff how to conduct environmental sampling, which gives them detailed steps to take to prevent further transmission,” Beer said. CDC also provided the laboratory testing protocols, the recipe for the growth media, and other information so the microbiology lab could identify cases on site.

“The work in Oklahoma was deemed successful because CDC did not find further evidence of transmission,” Beer said. “This is a testament to the quality of the hospital’s lab surveillance, infection control, and its commitment to finding and preventing C. auris transmission. Detecting C. auris early and responding aggressively at one case made all the difference.”

CDC’s containment strategy was developed just for situations such as this. The multifaceted strategy assists state and local health departments and health care facilities to respond to the detection of even a single isolate of a targeted pathogen within their jurisdiction or facility with the ultimate goal of slowing the spread of targeted resistant organisms. To implement the strategy broadly, CDC has funded health departments nationwide both to improve detection of these organisms and to facilitate a coordinated response when they are identified.