In 2017, CDC investigated more than 200 multistate clusters of foodborne and enteric zoonotic illness. CDC worked with the U.S. Food and Drug Administration, the U.S. Department of Agriculture, and state health and regulatory partners to identify the source of these outbreaks.

In early 2017, CDC worked with partners to quickly investigate and stop a fast-moving outbreak of Shiga toxin-producing E. coli infections, which sickened 32 people—mostly children— in 12 states. The source was soy nut butter, which had never before been linked to an outbreak. Public health investigators found the source of the outbreak within eight days of detecting it in PulseNet, a national network of laboratories that connects foodborne illness cases to detect outbreaks, preventing further illnesses.

In summer 2017, CDC and partners investigated four separate multistate outbreaks of Salmonella infections to Maradol papayas imported from Mexico. Investigators used CDC’s PulseNet system to identify a total of 251 illnesses from 26 states, including 79 hospitalizations and two deaths. Several companies recalled papayas from farms in Mexico, and the FDA increased testing for imported papayas.

In 2017, CDC worked with partners to investigate an outbreak of multidrug-resistant Salmonella Heidelberg infections linked to contact with dairy calves. CDC tests showed that isolates from ill people were resistant to multiple antibiotics, including first-line treatment. By the end of 2017, 54 people from 15 states had been infected. State veterinary laboratories first identified this outbreak in the dairy calves. The subsequent collaboration with health officials highlighted the importance of practicing One Health to keep people and animals healthy. 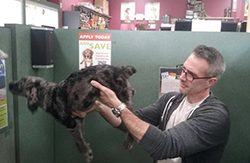 Dr. Scott Robertson (EIS 2017) examines a puppy in a pet store for signs of diarrhea.

Campylobacter infections linked to puppies sold at a nationwide chain of pet stores sickened 113 people in 17 states. Most of them had a puppy, and some of them worked in pet stores. Campylobacter bacteria found in clinical samples from sick people and puppies were resistant to commonly recommended, first-line antibiotics. The investigation enhanced efforts to work with the pet industry on improving antimicrobial stewardship.

In 2017, CDC identified 1,120 cases of human illness across the United States linked to contact with backyard poultry, the largest number of cases ever recorded. Live poultry, such as chickens and ducks, can carry Salmonella bacteria but appear healthy and clean, with no sign of illness. CDC continues to work with state and local health officials, federal partners, feed stores, and hatcheries to educate consumers as well as reduce the burden of Salmonella. 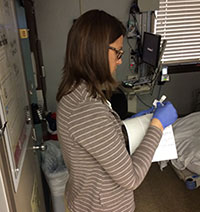 The first U.S. cases of the multidrug-resistant Candida auris were found in 2016. In 2017, more than 200 cases were reported. In April 2017, CDC responded to a case in an Oklahoma hospital to be sure it did not spread. Through successful infection control in the hospital and robust coordination between CDC and the state health department, C. auris did not spread beyond the initial patient.

C. auris is a serious threat because it can spread from person to person in healthcare settings, live on surfaces for several weeks, and cause outbreaks in health care facilities. One in three patients with an invasive C. auris infection dies and the fungus is often resistant to drugs used to treat it. 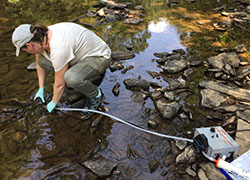 Diana Riner of CDC collects water samples from a creek.

In June 2017, CDC and state partners investigated an outbreak of norovirus infections in Pennsylvania after the disease was reported in attendees of three consecutive outdoor festivals. The suspected culprit was the venue’s septic system, which contaminated a drinking water well and creek water. CDC recommended use of a new well and gave guidance on the number of latrines and handwashing stations for a large event. CDC also set up disease surveillance and shared health messages at a camp medical tent staffed 24 hours a day.

In July 2017, an outbreak of Escherichia coli O157 (E. coli O157) infections sickened young children in a small community on the border of Utah and Arizona. E. coli O157 infections, which are caused by eating, drinking, or touching something contaminated with the bacteria, often cause bloody diarrhea and can also cause a life-threatening complication involving kidney failure, called hemolytic uremic syndrome (HUS). Local health officials asked a team of CDC epidemiologists to come to the community to help them investigate the outbreak. Two young children had died from HUS, and the outbreak was continuing.

By working directly with the affected community members, investigators learned important clues that helped solve this outbreak and provided opportunities to educate the community about ways to prevent E. coli infections in the future. The investigation ultimately revealed that contact with animals was the likely source of this outbreak.