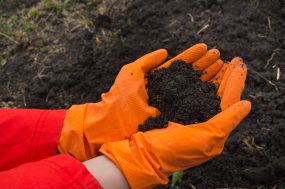 In August 2016, environmental protection officials tested the soil in a 19-household neighborhood in Appalachian Kentucky for arsenic. This neighborhood was built on a former site of a lumber treatment facility that closed in the 1980s. When the company shut down, it buried waste that contained arsenic compounds on the site. The amount of natural arsenic in soil typically ranges from one to 40 parts per million (ppm) in Appalachian Kentucky. The levels of arsenic in the neighborhood’s soil samples were extremely elevated, up to 31,000 ppm for some areas. Long-term exposure to arsenic can lead to chronic health issues like certain types of cancer. After discovering the contamination, state environmental and health officials declared the site a public health hazard, which led to a soil clean-up response.

The Kentucky Tracking Program assisted with the emergency response by creating a questionnaire for the neighborhood residents and interviewing them to assess their health histories and possible exposures to arsenic. Toenail samples were collected from residents as a measure of arsenic exposure. In addition, Kentucky tracking staff developed a fact sheet about arsenic for the residents. The Kentucky tracking program analyzed data collected from the interviews and lab test results from the toenail samples to determine which characteristics or activities of the residents were linked with arsenic exposure. The analysis showed that children were at higher risk of having elevated arsenic levels.

Note that CDC did not participate in human subjects, information collection, or data analyses and interpretation activities.

After the analysis, the state health tracking program staff, along with local, state, and federal partners, hosted a community meeting with neighborhood residents to share the lab test results. They answered residents’ concerns about possible health effects from exposure to arsenic. Tracking staff continued to assist residents by helping with follow-up surveys and testing six and twelve months later. Kentucky tracking staff analyzed these data and found that 88% of residents had lower levels of arsenic following soil clean-up efforts.

With the help and expertise provided by the Kentucky Tracking Program, public health practitioners could better understand the arsenic exposures among the residents and plan for follow-up and case management of the residents most affected, particularly children.