During the 2010 holiday season, Dr. Marilyn Radke read one of the many greeting cards she receives during that time of year. After reading the card, tears were streaming down her face. The letter was from Private A. E. Harper, a veteran she had been assisting in his search for treatment for a very unusual condition. Harper had been exposed to sulfur mustard – or mustard gas – while he was in Bari, Italy during World War II.

Sulfur mustard was introduced in World War I as a chemical warfare agent. It has since been banned by international treaties. It causes the skin to blister and can also damage the eyes and breathing (respiratory) system. 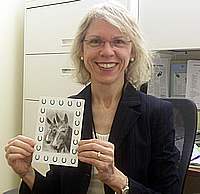 On Dec. 2, 1943, a German air attack sank 17 merchant ships in the Italian port of Bari. One of the ships destroyed that day was carrying a secret cargo of 100 tons of mustard gas bombs. The bombs exploded, releasing sulfur mustard into the harbor and the air. Many soldiers and civilians were injured or died from the mustard gas effects.

Unaware of the sulfur mustard toxins remaining in the water, Harper went for a weekend swim in Bari in March 1945. Later, when he noticed the blisters and burns on his arms and chest, he thought he was sunburned. But when his symptoms did not go away, Harper feared his condition might be more serious. He went to hospitals in Bari and Rome, but doctors were unable to help him. They were not familiar with the effects of sulfur mustard exposure or how to treat it.

Throughout the years, Harper had contacted a number of private and public institutions and specialists. Dermatologists, oncologists and other specialists treated him for his symptoms and for skin and other types of cancer, but without relief. More than 65 years later, his skin remains extremely sensitive; so he must avoid the sun and wear only cotton shirts.

EPHRB is a nationally-recognized authority on the health effects of exposure to chemical weapons. In 1970, Congress began passing increasingly strict laws requiring the Department of Defense to develop disposal plans for chemical weapons stockpiled at 9 locations within the U.S. Since 1983, EPHRB has been responsible for reviewing these plans. Dr. Radke explains, “The branch recommends actions to protect the health of workers and of people that could potentially be exposed to them. EPHRB has also published emergency room procedures for chemical hazard emergencies, and recommendations for airborne exposures limits for chemical warfare agents like sulfur mustard.”

When Radke found out about Harper’s condition, medical history, and treatment challenges, she immediately began gathering information that could help him. She gave Harper CDC’s “Facts about Sulfur Mustard”− an overview that includes signs, symptoms and treatment for the chemical− as well as research articles and contact information for specialized health care providers.

Harper contacted several specialists Radke had recommended. They were able to tailor a treatment for his condition and address most of his questions using the materials and fact sheets she had provided. Now he is being effectively treated by a dermatologist in the Veterans Affairs Medical Center near his home town. Radke is pleased that Harper has kept her updated on his progress, but she was especially moved by his letter of gratitude at Christmas.

“It is not that often that we get to touch individuals’ lives directly as we practice population medicine. Being able to help this person shows us how important our work is. I am sure there are many times in our work with populations that we touch individuals and make a difference, and we just don’t know about it. It is very gratifying to know that the work that everybody at NCEH has done over the years to gather the knowledge in dealing with chemical agents has helped many people like Private Harper and that he really appreciates it,” she said.