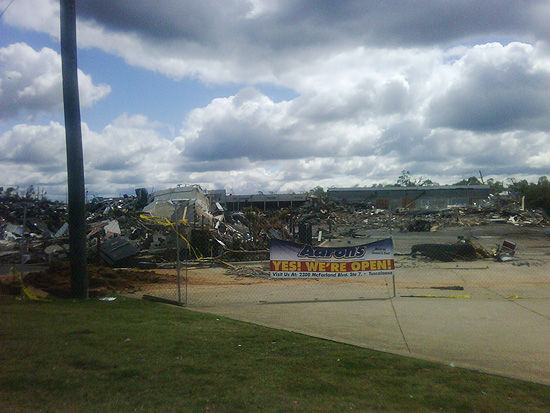 On April 27, 2011, Director Tim Hatch began his day at the Alabama Department of Public Health (ADPH) thinking, “My schedule is finally clear.” It wasn’t long before he realized he should “never, ever say that.”

On that day, disaster struck. Tornadoes ripped through the state, causing death and destruction in Tuscaloosa, Cullman, and Birmingham as well as some rural communities in northwest Alabama. From 1:00 to 11:00 PM, Hatch was in the ADPH Emergency Operations Center in Montgomery, tracking the tornadoes and responding to the disaster. Hatch and staff members in health departments across the state were prepared to respond to the problems caused by the tornadoes in part because of the Environmental Health Training in Emergency Response (EHTER) course developed by CDC’s National Center for Environmental Health. 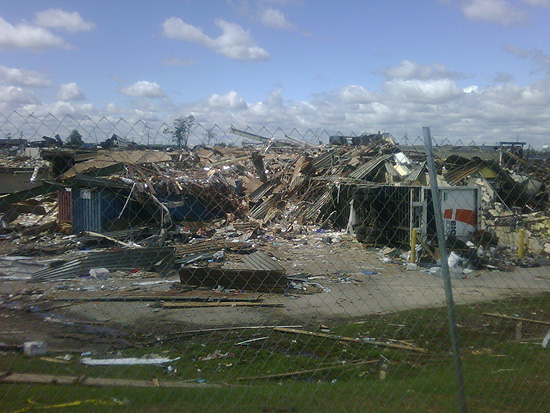 Environmental health concerns arise immediately in both natural and man-made disasters. Hatch, Environmental Program Director of the Center for Emergency Preparedness in ADPH, says, “Everything affects environmental health. When electric power is gone, food, water, and sanitation are affected.”

Hatch explains the rapid spread of environmental health concerns in emergencies. “When power is out, restaurants and other food establishments cannot refrigerate food, causing a food shortage. People who have lost their homes need shelter from the storms and somewhere to sleep after the storms have passed. Water pipes may burst and overflow, and, since water plants and sanitation systems operate by electricity, the safe water supply is threatened. Eventually, even toilets will not flush. Flood water may contain sewage or other sources of illness. Widespread debris can present a variety of dangers, from bacteria to physical hazards. Disease-carrying rodents and insects move about disaster areas easily.”

But thanks to EHTER, Hatch says, “Environmental health workers are prepared for disasters so they don’t have to react.” In Alabama, this preparation was essential when the emergency response teams went into recovery mode calculating injuries and fatalities, re-routing ambulances through rubble-blocked streets, and making rapid assessments. Because the devastation was so severe, many EH staff members could not get to work, so a limited group of workers had to do the work of the entire team in the same amount of time.

Health assessments of food establishments are critical in early emergency response to prevent people from eating food that is unsafe. In Alabama, Hatch says, environmental health workers conducted “drive-by assessments,” the only kind that can be done with fewer workers and impassable roads. “Restaurant inspectors were looking for the basics. Is the roof still intact? Do food establishments have water and power?” 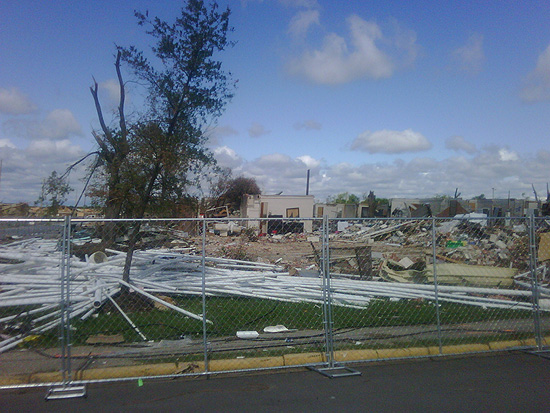 Local plumbing supply store demolished by tornado only a few blocks from the University of Alabama.

The Alabama environmental health staff is prepared to respond to disasters like the tornadoes because they follow EHTER’s core preparedness principles. Hatch says, “You have to know who your partners are; know whom to call about food, water, and solid waste; and know how environmental health fits into the disaster response model.”

He points out some key preparedness measures that were already in place. “The relationship with our sister agencies was already well-established; boil-water notices were already written; and contingency plans were in place, such as those for debris management and portable toilet facilities.” This planning and preparation saved valuable time.

Environmental Health workers handled many difficulties more easily because they were prepared. For example, the tornado left garbage trucks parked in Tuscaloosa’s city yard too damaged to use. The health department’s contingency plans called for private companies and other municipalities to use their trucks to pick up the massive amounts of debris. The ADPH had also made prior arrangements with the Alabama Department of Environmental Management for burying and burning garbage in case of just such an emergency.

Hatch says that even though the ADPH has responded to hurricanes, tornadoes, and a bad ice storm, the demands of this disaster exceeded them all. Hatch has high praise for local staff and the emergency preparedness environmental health practitioners who serve as “strike team” members. “They are people who work well under pressure and know their stuff,” he says.

Hatch first attended the EHTER course at the Federal Emergency Management Agency’s (FEMA) Center for Domestic Preparedness (CDP) in Anniston, AL in 2009. Shortly thereafter he too became an EHTER instructor and helped teach his 20th course in September 2011. Hatch teaches four modules regularly—potable water, wastewater, food safety, and shelters—and sometimes the responder safety module. He finds the teaching rewarding, especially because most of the people who attend the course want to be there. Hatch says, “I learn as much from them as I hope they learn from me.” He also calls the instructor cadre “top-notch” and EHTER the “best thing going,” adding, “If my teaching affiliation were to end tomorrow, I would still be a proponent of EHTER.”