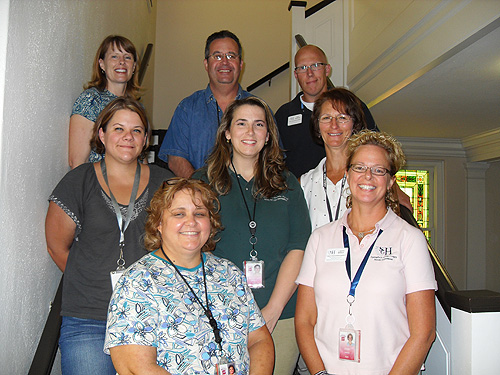 When Amanda Bennett took CDC’s Environmental Health Training in Emergency Response (EHTER) at the Federal Emergency Management Agency’s (FEMA) Center for Domestic Preparedness (CDP) in Anniston, AL in 2010, she had no idea that she would be putting these lessons to good use in a year’s time—almost in her own back yard. As an environmental health practitioner in the Springfield-Greene County Health Department (HD), Bennett was part of the emergency response to the nearby 2011 Joplin, MO, tornado that killed 160 people, wounded over 1000 and left a ¾ mile path of destruction.

Bennett did not originally plan to work in environmental health. She began her career with an emergency response internship in her home state of Arkansas, hoping to move into a job when her internship was over. Because no emergency response positions were open, she accepted a job as a public health inspector, first in Arkansas and a year later in Missouri. It wasn’t long before Bennett recognized how essential environmental public health practice is.

“Environmental health workers are vital in disasters,” she says. “They do not have the dramatic search and rescue role, but without them, how do you get things back to normal? How do you make things safe?” She adds, “EHTER gives students access to all the jobs environmental health practitioners can do in disasters—from supervising tetanus shots to manning shelters during an ice storm. The course runs the gamut of all the activities that are within the scope of environmental health response.”

Bennett captures well the specific EHTER lessons that trained her for the tornado response. The first lesson that continues to inspire her is to prepare for emergency responses before emergencies strike. In Missouri and neighboring states, tornadoes are common. In the past 30 years, Springfield has experienced 3 tornadoes, though none as destructive as the one that hit Joplin; however, Bennett considers the possibility inevitable.

Bennett explains, “If you have not prepared, what will you do with the masses of solid waste? Where will you find equipment to clean up debris? Where will you locate enough portable toilets?” EHTER taught her to set up contracts before a disaster so that the health department can get what it needs to respond quickly to the emergency. Springfield HD now has necessary contracts in place, so that when disaster strikes, it will be prepared.

Another important EHTER lesson that was especially useful during the tornado response is to establish specific objectives and stick to them. The Springfield environmental health staff was ready and eager to head to Joplin to assist in the emergency response. Although they assisted the regional vaccination team spearheaded by their department, within a week, the Joplin Environmental Health Department contacted them with a more pressing need.

The Joplin environmental health team had done an initial rapid assessment of food establishments from restaurants to school cafeterias to determine which had been destroyed by the tornado. Now they needed more information about the eating places, so they asked the Springfield environmental health team to do a more detailed assessment. The first challenge was finding the locations in debris-strewn areas with no street signs and few standing buildings.

When the Springfield team found the restaurants that were still standing, they checked them to see what damage had occurred since the initial rapid assessment, such as walls that had collapsed or equipment that was no longer working. Then they determined when the establishment lost power and if water lines had been damaged. Restaurants cannot operate safely without electricity for refrigeration and a clean water supply. In the aftermath of disasters, health departments also need to know what food products restaurants have and what happened to the products during and following the disaster.

Because the Joplin environmental health team was stretched to the limit by the tornado response, the Springfield team provided the “feet on the ground” to help Joplin prioritize further restaurant inspection. By sticking to the stated objective, the Springfield team helped the Joplin team keep people safe from food-related diseases and helped the town recover more quickly from the tornado.

Bennett found another opportunity to use the EHTER lesson about specific objectives in dealing with people who are not part of the official emergency response team. Although these well- intentioned citizens often think that distributing home- prepared food is helpful, many of them may not be familiar with safe food storage, handling, and cooking procedures, resulting in an increased risk for foodborne illness. The EHTER course not only taught Bennett how to monitor food distribution, but also how to provide such people a specific, more practical objective that allows them to feel useful and actually contribute to the emergency response.

During the EHTER course, Bennett also learned how important it is to understand the roles of different organizations during an emergency and to let all responders do their jobs. The risks following a disaster are high, so much of what responders do at first is damage control. Responders need to let other agencies do their jobs and to be flexible about procedures. Bennett learned that responders can act more quickly if they are flexible and do not demand that things be done their way.

Bennett says that one of the most important results of the course was that “EHTER made me a thinking person. This is what all education should do—it should cause you to ask yourself questions.” Both the specific lessons learned and the ability to think through environmental health issues prepared her well for the Joplin tornado response. Although the tornado response was demanding, Bennett valued the experience. “I was trained to respond to disasters in environmental health, but had not gotten to use my training,” she says. “I finally got to do something I was trained to do. It felt good to be useful.”