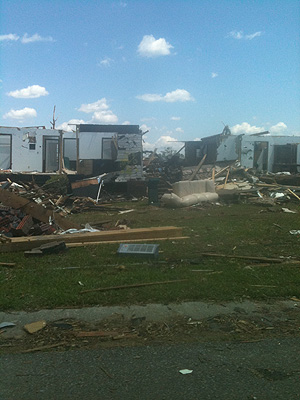 From April 25-28, 2011, violent storms spawned tornadoes across the southeastern United States, hitting Alabama, Georgia, Mississippi, and Tennessee the hardest. The April 27 tornado that leveled parts of Tuscaloosa, AL (see EHTER Preparation Comes in Handy in Alabama Tornado Response) was one of several that hit the state. Communities near Birmingham in Jefferson County were also devastated. Fortunately, Haskey Bryant, a 2010 graduate of CDC’s Environmental Health Training in Emergency Response (EHTER), was well-prepared to respond to the tornadoes in the Birmingham area.

One of Bryant’s main responsibilities as an environmental health emergency responder was to assess, inspect, and advise food establishments in the stricken areas. In every emergency, food sources are essential, both for survivors who have lost their homes and for responders who are out in the field. But following disasters, food establishments frequently are damaged. Electric power is out, sometimes for days or even weeks, affecting food storage and cooking. Because water treatment plants also run on electricity, the water supply may be affected as well.

The day after the tornado, Bryant and her team went to disaster areas to check restaurants and other food establishments such as school cafeterias to determine how long their power had been out and what had been done with the food since that time. 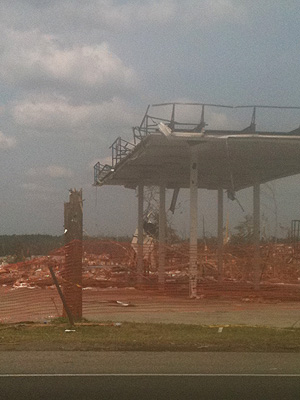 When her team arrived in Pleasant Grove, a community west of Birmingham, Bryant says, “As far as you could see, Pleasant Grove was wiped out. Whole neighborhoods were completely gone.” But safe food was available from professional charitable organizations that brought feeding stations housed in 18-wheelers. These mass feeding shelters were professionally equipped with stoves, refrigeration, and water to meet the requirements of the health department, and the volunteers were trained in food safety procedures.

However, as often happens following disasters, well-meaning citizens who were not part of the official emergency response team also had set up feeding sites. To many concerned citizens, supplying food in an emergency seems a good way to help victims. But too often, they do not know or follow procedures to keep food safe. They may have no way to keep food cold or hot, resulting in spoiled food and the spread of disease. Although the health department does not have the authority to regulate groups that give food away, the Jefferson County environmental health team members did counsel many such group members on safe food-handling practices. They also helped workers in a hastily set up shelter organize a feeding schedule to keep food safe and advised them to avoid home-made food.

Later that day, Bryant’s team also went to Forestdale, a community southwest of Birmingham. Because of negative pressure on the water lines, the area was on a precautionary “boil water” notice for 24-48 hours. Restaurants are not permitted to operate under a boil water notice, and after the notice is lifted, water must be tested until it is safe to use. They checked all restaurants and made sure owners knew that they could not open until the boil water notice was lifted. 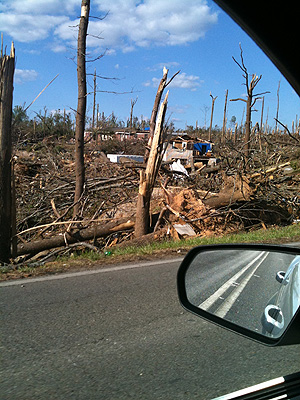 Following a key principle taught during the EHTER course, the Jefferson County tornado response operated from an incident command center that centralized all search, rescue, and environmental health activities, meeting needs as quickly as possible without duplicating actions. EHTER preparation, says Bryant, helped the response to be “more orderly and less frightening” for both responders and victims.

“I am a huge fan of EHTER,” Bryant adds. “During the course, we looked at every aspect of environmental health in emergency response, including things we don’t normally deal with, like shelters and waste management.” And Bryant used those very skills to inspect the unplanned shelter and advise a showering facility that was improperly releasing wastewater into a ditch.

“You may not become a master of the information presented in the EHTER course,” Bryant says, “but you learn what questions to ask and what to look for. If you are prepared before an emergency, you can get to work sooner and be better protected.” And because of that knowledge and preparation as well as her hard work, the Alabama environmental health director calls Bryant, “one of the best environmental health workers in the state!”