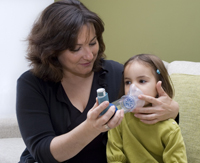 “My kids have asthma and so do I.” In fact, the mom’s case was far worse. Unlike her children, this Illinois mother had no regular source of medical care. She regularly went to the emergency room when the panicky struggle to breathe overwhelmed her during bad asthma attacks.

Through a CDC-funded asthma control program, a caseworker educated the young mother about how she could control her asthma with medications and by avoiding asthma triggers. The caseworker demonstrated how an easy-to-carry inhaler could help her breathe easily, without anxiety, when medications failed to prevent an attack. The caseworker also talked with her about how to minimize dust, tobacco smoke, and other common substances at home that trigger asthma attacks. In addition, the caseworker emphasized the importance of a primary care doctor who could look after her regularly and be available so she would not have to visit the emergency room (ER) so often. Six weeks later, the mother approached the caseworker at a community health fair. She had found a primary doctor, and she was beginning to get her asthma under control. The caseworker was pleased at the woman’s success. With better and regular medical care, the young mother could more effectively care for herself and her children and would have far fewer ER visits.

Asthma – a disease in which something causes the airways of the lungs to become blocked, making breathing very difficult.