Synthetic cannabinoids (“synthetic marijuana,” “Spice,” and “K2”) are various manmade chemicals that can be used as an alternative to marijuana (see sidebar). These seemingly innocent little packages of “fake weed” can cause serious side effects, which can be very different from those of marijuana.

Nonplant-based chemicals in synthetic cannabinoid products can be toxic. As a result, people who smoke these products can react with a rapid heart rate, vomiting, agitation, confusion, and hallucinations. Some find themselves seeking help in hospital emergency departments or intensive care units. 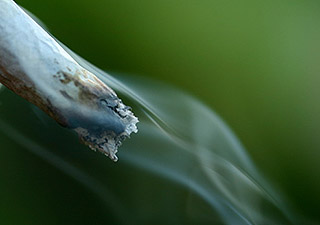 That’s exactly what happened to more than 200 people who sought care at several Denver and Colorado Springs hospitals over a four-week period in the summer of 2013. Hospitals reported an increase of emergency department visits (ED visits) that they suspected were associated with synthetic cannabinoid use to the Colorado Department of Public Health and Environment (CDPHE). In response, the health department asked CDC’s Health Studies Branch to help investigate and identify the cause behind so many ED visits with similar symptoms.

What did CDC do?

CDPHE asked CDC to help with an epidemiologic investigation to do four main things:

The investigative team reviewed ED visit reports and medical records of patients suspected of having a negative reaction to a synthetic cannabinoid product within a 24-hour period of their admission. Of the 263 suspected cases identified over a month’s time, 221 of the hospital admissions were determined to be probable cases, and 127 cases of that group were selected to conduct a more detailed epidemiologic investigation.

What was the public health impact?

As part of the investigation, patients identified two convenience stores, one “head shop,” and one gas station as sources of synthetic marijuana products involved in this outbreak. These stores subsequently were closed by Colorado law enforcement officials.

To alert the public to the outbreak, CDPHE released messages regarding the dangers of synthetic cannabinoids via social media and the news media. The investigation provided geographic and demographic information that enabled CDPHE to focus the messaging toward teens and young men in certain geographic areas. A few months later, federal authorities deemed it illegal to manufacture and sell some of the popular brands identified in the investigation, according to CDPHE.

Yet despite enforcement efforts, manufacturers can easily dodge legal bans of a particular product by changing the chemical composition slightly and giving the product a new name, according to the American Association of Poison Control Centers (See http://www.aapcc.org/press/43/.

In the first quarter of 2015, poison centers across the U.S. received 1,900 exposure calls, which sparked AAPCC to issue a press release of warning. “These synthetic drugs present a potentially fatal risk that is not well recognized by people consuming these products,” said AAPCC President Jay Schauben.

Outbreaks associated with suspected toxic forms of synthetic marijuana continue to occur, and CDC, state health departments, and AAPCC are working together to help states rapidly identify the source and to continue to warn the public about the dangers of these products.