Johnni Daniel and Ellen Yard are HS co-leaders for the project. Co-principal investigators include CDC’s Global Health Office in Kenya and its National Center for Environmental Health (NCEH); the Kenya Ministry of Public Health and Sanitation (MOPHS); the Kenya Medical Research Institute; and Texas A&M University.

CDC selected an HS proposal related to aflatoxicosis as a winner of the 2013 iFund Challenge. The proposal was one of only 10 projects awarded funding from 44 submissions. This prestigious award includes $100,000 funding for the project. 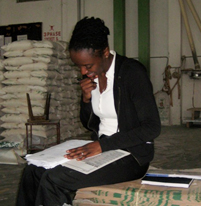 This is a Life-Saving Proposal

One promising intervention is NovaSil clay. After a person takes NovaSil, it binds to any aflatoxin in his system and prevents it from being absorbed into the body. HS’s proposal recommends testing the use of NovaSil clay tablets to block the ravaging effects of aflatoxin. NovaSil clay may offer a low-cost, culturally acceptable prevention.

“This award has the potential to do so much to help protect Kenya’s high-risk communities, where the threat of aflatoxin sickness and mortality is an everyday danger,” said Ellen Yard, the project’s other co-lead. 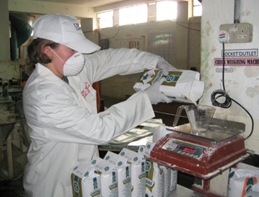 Epidemiologist Ellen Yard measures a sample for the investigation.

Aflatoxin Levels are High in Kenya

Some of the highest aflatoxin levels recorded in food or people occur in Kenya, which experiences recurring aflatoxicosis outbreaks. In a recent survey, CDC estimated that nearly 80% of Kenyans was exposed to aflatoxins.

Aflatoxins are produced by the fungi Aspergillus flavus and A. parasiticus. These fungi contaminate cereal grains such as maize and oilseed crops worldwide and expose an estimated 4.5 billion people. Aflatoxins can cause cancer and they interfere with the body’s ability to absorb nutrients. Their consumption can cause health effects ranging from liver cancer (specifically hepatocellular carcinoma), suppression of the immune system (immunosuppression), and growth stunting. In high doses, they can cause acute aflatoxicosis, which can lead to jaundice, vomiting, abdominal pain, liver failure, and even death. In fact, nearly 40% of people with acute aflatoxicosis die.

Read more about the work that led to this proposal. Illness and death plagued rural Kenya, and HS conducted a rapid investigation to help solve the mystery. 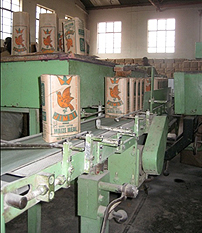 Maize meal, a food staple in Ethiopia, was found to be infected with aflatoxin.

Parts of Africa are Especially Vulnerable

Exposure to aflatoxin is often higher in Sub-Saharan Africa and Southeast Asia, where high temperatures and drought promote fungal growth. Food harvesting and storage practices, an absence of regulations, food insecurity, and economic burdens often converge to put these populations at high-risk for life-long exposure to these harmful toxins.

The HS team will pilot test the effectiveness and acceptability of NovaSil clay in a high-risk Kenyan population. If successful, NovaSil could be scaled-up for use in Kenya and neighboring countries to prevent disease and death caused by aflatoxicosis.

“Ideally, the best long-term solution would be to reduce aflatoxin contamination in maize and groundnuts through improved harvesting, drying, and storage techniques; genetically modified crops; or application of nontoxic fungi to reduce the growth of aflatoxin.” Yard said. However, many of these interventions are still being developed and are not ready for large-scale implementation.

What Will HS and Collaborators Do?

HSB’s pilot study will allow researchers to determine if NovaSil prevents aflatoxicosis among vulnerable populations during high-risk periods, which typically is April and May in Kenya. If NovaSil is effective, its distribution could be scaled up during high-risk periods to decrease the risks of adverse health effects such as liver failure across many at-risk communities—both in Kenya and in neighboring countries—ultimately protecting numerous infants, children, and adults.