With the extensive heat dome and drought conditions this summer and fall, many states are experiencing widespread cyanobacteria blooms in local waterways.  Colorful but sometimes health-threatening blooms float atop large expanses of public drinking water sources and popular recreation areas, prompting alarming news headlines and frightening residents. CDC’s new HAB-associated illnesses website is proving itself as a “go-to” resource for states and cities. 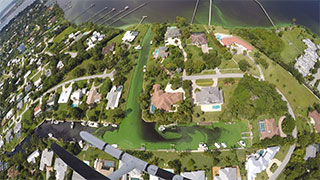 Just in time for this seasons’ blooms, the U.S. Centers for Disease Control and Prevention (CDC) launched a new national reporting system for harmful algal blooms (HABS), called One Health Harmful Algal Bloom System (OHHABS).  OHHABS provides an electronic platform for state public health departments to report human and animal illnesses resulting from exposure to HABs. Over time, OHHABS will provide important data to monitor seasonal and annual trends in bloom occurrence, whether the blooms are harmful, and cases of HAB-associated illnesses in animals and people

OHHABS and the website were developed as part of a CDC collaboration with the U.S. Environmental Protection Agency (EPA) and the Great Lakes Restoration Initiative and included input from multiple state public health departments and federal agencies.

“This new surveillance system is the result of a long-term collaboration between the National Center for Environmental Health (NCEH) and the National Center for Emerging Zoonotic and Infectious Diseases (NCEZID) along with state public health partners,” said Lorraine Backer, a senior epidemiologist in NCEH. Backer has devoted much of her CDC career to investigating HABs and public health.

States from all parts of the country have already reported human and animal illnesses to OHHABS, setting the stage for future abilities to monitor geographic and temporal trends in public health effects from Harmful Algal Bloom (HAB) events.

“We knew that we needed to launch OHHABS and the new website early in the summer,” said Virginia Roberts, an epidemiologist in NCEZID’s Waterborne Disease Prevention Branch who is leading CDC’s HAB surveillance efforts. “However, with large harmful algal bloom events occurring in multiple states this year, we saw just how critical it was for CDC to have a mechanism to collect data about the presence of these blooms and their health effects.”

“Launching OHHABS is a big part of the comprehensive approach that is now in place at CDC, Backer said. “This has been our vision for a long time. It’s exciting to see it now working so well.”

In 2016, Utah Lake, the biggest freshwater lake in Utah and a popular destination for all kinds of water-related recreational activities, experienced the largest cyanobacteria bloom state officials had ever encountered.  During June and July of 2016, NCEH’s monitoring of calls to poison centers nationwide identified an increase in calls about possible exposure to the blooms in Utah.  This is where NCEH’s close relationship with the American Association of Poison Control Centers (AAPCCexternal icon) provided a boost to the ability of public health responders to work together quickly.

Armed with information about an uptick of calls to Utah poison control staff, NCEH scientists worked with Utah public health officials to determine that the public was at risk. State officials closed the lake to swimmers because of data suggesting the need for concern about potential exposure to cyanobacterial toxins.

HABs outbreaks can risk the health of people, animals and the environment

Because HABs affect people, animals, and the environment, they are considered a One Health issue. We have an incomplete understanding of the health impact of HABs, so it’s important to document when they happen, where they happen, and whether they cause illness (See map below of national outbreaks in September 2016). Toxins released by harmful algal blooms can cause a variety of illnesses in people or animals. Inhaling some of these toxins can cause coughing or respiratory problems, and swimming in water with a harmful algal bloom can cause skin rashes or other symptoms. People also can get sick from eating fish or shellfish or drinking tap water contaminated with the HAB toxins. 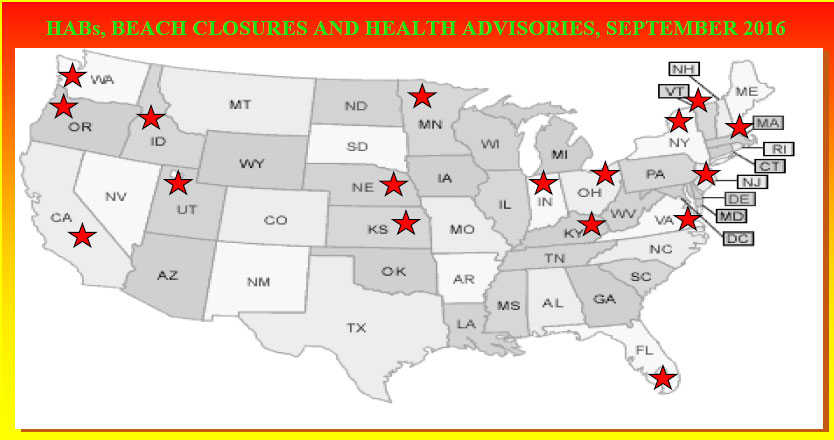 “Data collected will help CDC and partners learn more about these blooms and understand how to best prevent them and the illnesses they cause,” said Backer.  “This is exactly what happened recently when CDC and state public officials worked together to take action at Utah Lake.”

When the surveillance system was launched, CDC also posted a new comprehensive, collaborative website  with important information for health officials and the public on how to recognize these blooms; what people can do to protect themselves, their families, and their pets; and how health officials can receive technical assistance from CDC.

When an algal bloom began affecting water in Lake Okeechobee in Florida in May 2016, local officials and foundations began looking for new ways to tackle blooms and reached out to local entrepreneurs to identify new technology and solutions (Photo above shows a HABs outbreak in a neighborhood in Stuart, FL).

The Florida Departments of Health and Environmental Protection reached out to Health Studies at NCEH and the National Institute of Occupational Safety and Health (NIOSH) for advice on protecting staff and entrepreneurs cleaning up the bloom from exposure to aerosols that might contain cyanobacterial toxins.

“After treatment, they pumped the cleaned water out with enough force to break up the algae mats in the canal. We don’t know if breaking up the mats this way can create airborne water droplets that might contain the cyanobacteria or cyanobacterial toxins. We were concerned that people nearby could breathe in these droplets and be exposed to the cells and/or toxins. We provided the Florida Department of Health with recommendations on work practices and personal protective equipment to protect the workers.”