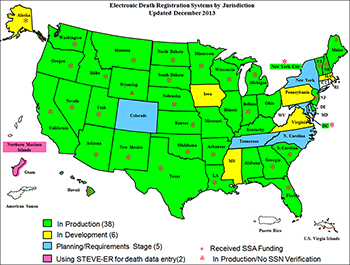 You often hear about the importance of electronic medical records and electronic health records, but what about electronic death records? In a disaster, prompt and accurate recording of death certificates are critical for effective post-disaster surveillance. Until recent CDC efforts, however, timely and accurate vital records lagged far behind what public health and communities in distress need.

No one knows this issue better than Commander Rebecca Noe, an epidemiologist specializing in environmental disaster response. In her 6-year career with the National Center for Environmental Health (NCEH), Noe has spent many days on the front lines of field surveillance gathering critical information following deadly disasters. (See more about Noe’s professional and personal interests in the environment and her award as “Responder of the Year” for 2015 from the U.S. Commissioned Corps following this story.)

Early on, the big questions in Noe’s mind became: How are disaster deaths being tracked in the U.S. and can we leverage the state-based Electronic Death Registration Systems (EDRS) for timely and better mortality data during and soon after a disaster?

“This kind of work supports community resilience after a disaster. FEMA provides funeral benefits to families but require families’ to obtain, deliver, and produce a paper copy of the death certificate to receive these funds. More efficient electronic data sharing via state-based EDRS during a disaster could alleviate this burdened to these grieving families.

She actually discovered a more basic issue. “A death certificate might indicate a person died from a traumatic head injury, but there would be no mention of a tornado,” Noe said, recalling the epidemiology investigation after the spate of tornadoes struck the Southeast in 2011. Similarly, she said, after Hurricane Ike wreaked havoc through Texas and nearby states in 2008, out of 75 deaths captured in active surveillance following the hurricane, only five percent could be identified as related to the hurricane, in a key word search (e.g., Ike, storm) of the vital statistics data.

Improved mortality data can benefit communities and families after disasters

While accurate and complete mortality data are critical for public health disaster response and epidemiologic research, it also has many personal implications for individual families affected by a disaster, Noe noted.

“This kind of work supports community resilience after a disaster, “she said. “More efficient electronic data-sharing can enable individuals and families to receive Federal Emergency Management Agency (FEMA) funeral benefits for their lost loved ones in a timely manner, and not be burdened with often complicated administrative hurdles.”

To tackle this challenge, Noe is working with several partners to develop guidance for Medical Examiners and Coroners on properly completing death certificates of disaster deaths. She also organized a national webinar to encourage a dialogue on leveraging the state-based Electronic Death Registration Systems (EDRS) for “near-real time” mortality data during a disaster. Mortality data are one of several types of information gathered, housed, and transmitted via the National Vital Statistics System (NVSS) at National center for Health Statistics.

Based on her field experiences, Noe recognized that the epi challenge came down to strengthening surveillance capacities for tracking disaster-related deaths by making the following changes:

The National Vital Statistics System (NVSS) is an inter-governmental system of sharing data on the vital statistics of the population of the United States. It involves coordination between the different state health departments of the US states and the National Center for Health Statistics (NCHS), a Center of CDC. NCHS’s mission is to gather and report statistics based on official records of live births, deaths, fetal deaths, marriages, divorces, and annulments. States and territories have the responsibility to record these events and transmit the information via NVSS to NCHS. For more information, see https://www.cdc.gov/nchs/nvss.htm.

Over the last several years, Noe has reached out to states where recent disasters have occurred to gather “success stories” on how EDRS systems improvements can make a clear difference. For example:

Noe, working closely with NCHS and OPHPR, has accomplished several key activities to advance the use and data quality in the various state-based electronic systems, such as the following:

Strengthening the nation’s vital statistics pre-dates even the early epidemiology of John Snow, who used scientific methods to identify the environment in which cholera was spreading in 1854. The states, even as far back as the Virginia Colony, collected vital information of varying levels. The first birth and death statistics published by the federal government for the entire U.S. were based on information collected in 1850. The rising spread of epidemics in the mid-1800s expanded and enhanced the awareness of how valuable this kind of information can be, yet standardizing the process and information needed has always been a challenge.

CDC’s 2014 strategic plan notes the need for enhancing NVSS and establishes a goal that by 2016, 80% of death reports occurring in at least 25 states will be transmitted electronically to public health within one day of registration and to CDC/NCHS within 10 days of the event. The plan points out, “Modernizing and transforming the NVSS into a system capable of supporting near real-time public health surveillance has been a long standing desire and need.”